Lava stole the show from ShowMaker. 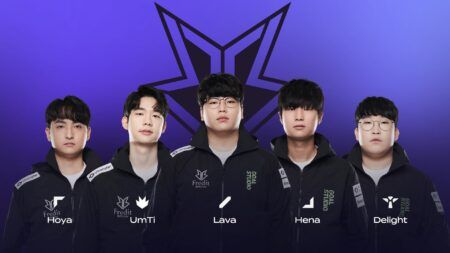 Fredit BRION had a lackluster beginning to the LCK season, getting swept by Gen.G and Afreeca Freecs in their first two matches. While many might rule out BRO as a squad that’s still finding its place in the league, its line-up consists of young, talented players who are still looking to prove themselves.

Luckily enough, their third match gave them the perfect opportunity.

Going up against KeSPA Cup 2020 and Worlds 2020 Champions DWG KIA (formerly DAMWON Gaming), all eyes were on the fresh team. And although the odds looked incredibly stacked against BRO, the team managed to deliver an unbelievable sweep against one of the best teams in the LCK, as well as the world.

Game one was a slow and steady opening for both teams. With Korea known for having a slower-paced playstyle, both sides took to constant farming to maintain a steady economy.

First blood gave fans the game’s first unexpected moment. Eom “UmTi” Seong-hyeon and Kim “Lava” Tae-hoon managed to outplay Heo “ShowMaker” Su with a simple 2v1 engagement in the mid lane, leaving the world-class mid laner behind in gold for most of the game.

By the 25-minute mark, Fredit BRION had a game-changing clash near the drake pit. Though things were looking grim with the early exit of Yoo “Delight” Hwan-joong, UmTi flanked right on time to give his team the ace and the Baron.

Taking no chances whatsoever, BRO stuck to playing safe and only initiated clashes if they were able to lock down a 4v5 situation. By the late-game phase, DK was caught flatfooted in trying to complete map objectives to keep up with BRO’s economy.

With a substantial gold lead, Lava and his crew had enough burst power to take out the tankier players like Cho “BeryL” Geon-hee’s Galio. After just one incredible shockwave and a near-ace outside the drake pit, BRO immediately rushed the Nexus for the game one win.

Though the game one victory may seem like luck for the new team, Fredit BRION continued to outplay ShowMaker and his world-class squad in the second game.

Now utilizing the poke-heavy Zoe, Lava was a menace in the mid lane. Capitalizing on a pinpoint Sleepy Trouble Bubble, Lava flashed right under the turret to secure a well-earned solo-kill on ShowMaker.

Unlike the first game, BRO used more of an aggressive playstyle in game two. Instead of playing the farming game, UmTi and the boys knew that they could pressure map control with bigger flanks. Even though Delight fell in the four-man tower dive, Fredit BRION came out with three kills to widen the gap.

BRO’s draft stayed mostly the same with only changes in the mid and top lane. Now having Ornn available for more substantial late-game moves, he also became an impenetrable front line alongside Delight’s returning Alistar.

In the final clash, the two tanks were able to nail an insane wombo-combo of Call of the Forge God and Pulverize, chaining a longer knock-up on DK’s back-line. As UmTi and Park “Hena” Jeung-hwan simply ran in to claim the kills, Fredit BRION ran down the mid lane once again to complete the sweep over DAMWON KIA.

While it might be too early to call Fredit BRION a top contender for the LCK titles or Worlds, the team has clearly shown that they have the potential to become a rising team in 2021. We’d like to see their chemistry develop around their key players, UmTi and Lava, to really show that they’re not just a one-game wonder.