Gen.G’s Rascal is playing like the best top laner in the LCK right now

#TigerNation pounces on the competition. 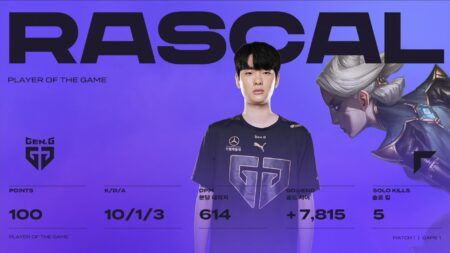 The 2021 LCK Spring Split has just begun and day one was a showcase of some of the best teams in the league. While T1 fought against the newly bolstered Hanwha Life Esports, Gen.G took a triumphant sweep over KT Rolster.

With KT Rolster taking in Choi “Doran” Hyeon-joon, the top lane duel was a battle to determine who was Korea’s best top laner.

With Jang “Nuguri” Ha-gwon transferring to the LPL, Kim “Rascal” Kwang-hee and Doran are the last two starting top laners who attended Worlds 2020, labeling this first-ever meeting as a grudge match.

Though KT Rolster boasted about Doran’s impeccable performances in scrims and the 2020 KeSPA Cup, Rascal felt more than confident that their unchanged roster could shut them down on the opening day of the season.

In the first game, Rascal brought out a killer Camille that easily slashed through Doran’s Gnar.

Though Doran might embody the young and ambitious star player of the league, Rascal’s more experienced mindset got the best of him in their early-game skirmishes. The Gen.G top laner locked down on the Gnar player on back-to-back occasions, proving that there’s more than one world-class top laner in this match.

Even with Doran pumping the brakes on his reckless advances, Rascal quickly teamed up with Gwak “Bdd” Bo-seong and Kim “Clid” Tae-min and dove the KT player for another momentous kill.

Looking at the bigger picture, Gen.G outclassed KT Rolster on many fronts. As the more cohesive team, Rascal and the boys rarely took trades and if they did, they’d trade for more important objectives such as an inhibitor or a Drake.

In the final moments of game, Rascal made an incredible dive into a crowded Nexus to teach Doran one more lesson. With a quick recall/teleport to get back in the action, he and Bdd finessed their way through another 2v2 and claimed the game victory.

Rascal came out as the Player of the Game with his dominating presence in the top lane, racking up five solo-kills and a 7k gold advantage. With his almost perfect 10/1/3 KDA, Rascal was an offensive force for Gen.G, dealing 614 DPM and a total of 22.3K damage over Doran’s 11.1K.

As for the second game, Rascal played the tanky Renekton while once again facing Doran’s Gnar. Despite taking fewer opportunities for solo-kills, Rascal came through as the hardened front-line who could crowd-control and funnel his resources to more prioritized farmers like Bdd or Park “Ruler” Jae-hyuk.

Even with a less kill-heavy champion, Rascal was an obvious playmaker for Gen.G. Despite missing out on the second POG, Rascal went to work with a 4/1/9 KDA over Doran’s 1/3/1.

While it may be too early in the season to predict who’ll be the best of the best, Gen.G and Rascal have proven through many seasons that they can consistently play at a Worlds-ready level. If Rascal wants to further cement his reputation as the top lane king, his next big targets are T1’s Kim “Canna” Chang-dong and Choi “Zeus” Woo-je.

As for KT Rolster, there’s no rush to see them skyrocket to the top just yet. Since the team just went through a roster rebuild around Son “Ucal” Woo-hyeon, we can’t really expect Doran to overtly carry the team to victory. As we saw earlier, Gen.G won by having pinpoint chemistry in engagements and map rotations.

Once KT Rolster is able to form a stronger synergy, Doran may be able to confidently contest Rascal later in the season.

READ MORE: The LCK will commence on January 13 with a new look and playoffs format