The Korean coach only spent a year with the team. 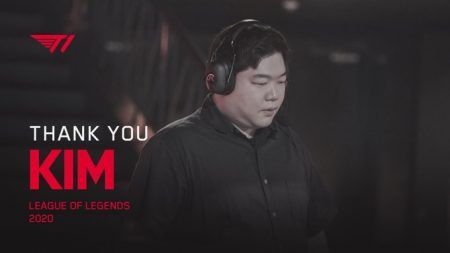 After a turbulent year for T1’s League of Legends team, head coach Kim “Kim” Jeong-soo has officially stepped down from his position.

T1 revealed in a post on their official Twitter account that Kim’s resignation came as a response to the team’s failure to make it to Worlds 2020, League of Legends’ most prestigious international tournament.

From the beginning of his time at T1, Kim had big shoes to fill as he replaced coaching legend Kim “kkOma” Jeong-gyun, who left the org in 2019.

Of course, Kim knew his way around dealing with Worlds-hungry superteams. In 2018, he led LPL’s Invictus Gaming to a glorious Worlds victory while also leading teams such as DAMWON Gaming and Longzhu Gaming to the tournament.

While the 2020 season ended on a sour note, as T1 failed to secure a Worlds slot at both the LCK Summer Playoffs and Regional Finals, Coach Kim started the year off strong with an impressive Spring performance.

Despite coming off of a gripping upset against G2 Esports in Worlds 2019, T1’s roster, filled with veterans like Lee “Faker” Sang-hyeok and a rookie in Kim “Canna” Chang-dong, rallied under Kim’s coaching and steadily dominated the Spring Split with a sweeping championship victory against rivals Gen.G.

Though his resignation from T1 seems abrupt, this will give him time to find another coaching position for the 2021 season. With the LCK transitioning into a franchise model, this may present Coach Kim a more stable coaching position in a fleshed-out organization, though he also has the option of heading back to China.

As for T1, we’ll be keeping an eye out for who’s next to lead Faker and the boys to victory. While it may be a long shot, many T1 fans are hoping for the return of kkOma, who resigned from Vici Gaming and headed back to Korea earlier this week.