You’ll surely be turning heads with these tees. 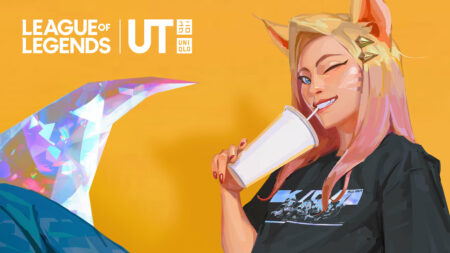 The company dropped a photo of K/DA Ahri in casual wear, sipping some beverages and biting her straw while winking at the camera. Blades (the official K/DA fandom name) will immediately recognize the design on Ahri’s black tee, which is the key visual for The Baddest, one of the songs in K/DA’s All Out album.

Aside from the K/DA The Baddest tee, five other designs have been revealed highlighting Jinx, Ekko, and a monochromatic version of one of League of Legends’ key visuals.

There’s also a design for poro lovers — literally a white shirt filled with cute, fluffy poros! Can you count them all?

For minimalists, the dark blue tee is made for you, showing off the iconic League of Legends client logo on its left chest.

Here are some of the shirt designs as modeled by virtual girl group K/DA.

The Uniqlo x League of Legends tees will be priced at US$20 apiece and will be available globally in stores and on Uniqlo’s website.

The official release date for the Uniqlo x League of Legends collection has not yet been revealed, but we’re already sensing long counter lines from League of Legends’ massive fanbase all around the world.