From Guardians to Thieves. 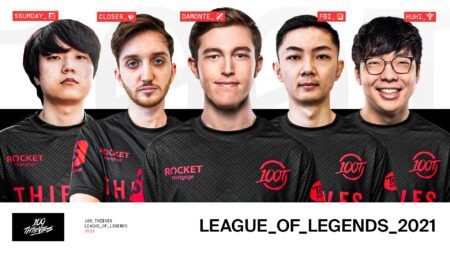 The League of Legends global free agency is now open and many teams in the LCS have been bolstering their rosters with some drastic transfers.

While the 2020 GGS roster was considered a mid-table squad, the team found some solid success in the Summer Split.

With Damonte joining their ranks as a tried-and-tested mid-laner, GGS went on to sweep the Doublelift-led TSM squad in the first round of Summer playoffs, although they would eventually be eliminated from the playoffs by TSM in the lower bracket.

The rising 2020 crew faced a sudden end due to organizational changes, but it seems just for 100 Thieves to bring the 4-stack together again for another run. With the former GGS crew already gelling together as one unit, 100 Thieves’ star top-laner Kim “Ssumday” Chan-ho becomes the cherry on top for the experienced line-up.

While 100 Thieves had a great start to 2020 placing third in the regular Spring season, they eventually lost their hold on the league. With players feeling left out and not performing to expectations, the team would barely make it into playoffs and face an early elimination.

With an almost brand-new line-up that already has a team foundation, 100 Thieves may become a top LCS contender in the 2021 season.