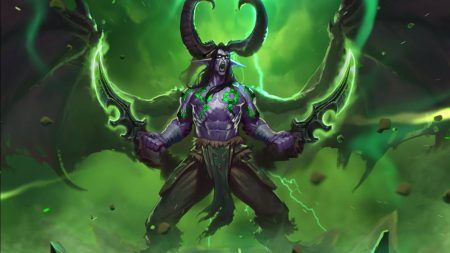 Hearthstone’s latest expansion, Ashes of Outland, went live worldwide on April 7, marking the start of the game’s Year of the Phoenix.

Ashes of Outland tells the story of Illidan Stormrage, the self-proclaimed lord of Outland, in his quest to lead his Demon Hunter army to reclaim the Black Temple — Outland’s last bastion of civilization — from the destructive Rusted Legion.

The new campaign shines the spotlight on the Demon Hunters, the first new class of heroes since the game launched in 2014. The fearsome warriors are proficient in close-quarters combat, using bladed weapons and claws. They also have massive Demon minions you can use to crush opponents.

Demon Hunters use a Hero Power called Demon Claws to boost their Attack for the cost of one mana.

15 new Demon Hunter cards will be added to the game with each new expansion launched in the Year of the Phoenix.

However, Hearthstone fans were quick to notice the impact of the new class on the game, calling out how Demon Hunters were suddenly the only class with a win rate above 50%.

Blizzard acted just as fast to re-balance the game, however. As listed on the Hearthstone subreddit, the following balance changes have been made from the server-side (meaning players don’t need to download anything to experience the update):

Blizzard made sure that players’ complaints about the Demon Hunters’ dominance were appeased as soon as possible, so the new stats will appear only in matches, not in players’ Collections. A new data-only patch is expected to be rolled out to apply the updated stats in Collections.

Specific Demon Hunter cards have also had their offering rates reduced in Arena:

Lastly, in an update to the subreddit post, Blizzard added that a full Arcane Dust refund will be issued for regular (100 Dust) and golden (800 Dust) copies of Skull of Gul’dan and Imprisoned Antaen. There will also be a full refund for golden Eye Beam (1600 Dust).

READ MORE: Over 120 cards and a new region are coming to Legends of Runeterra for its official launch