A sneak peek at Blastoise’s moveset in Pokemon Unite

Blastoise is coming to defend your goals real soon! 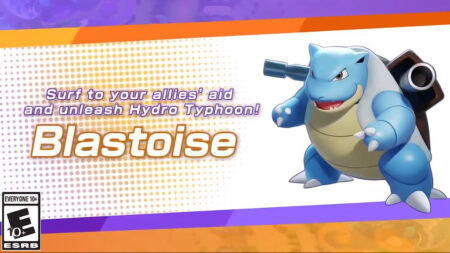 Save up your Aeos coins trainers, because Blastoise is finally coming to Pokemon Unite this September 1st, 2021.

Classified as a Defender like Snorlax and Slowbro, Blastoise’s role is to disrupt his opponents by shoving them around, and pulling attention away from his squishy allies.

Defenders are naturally tanky, and Blastoise will want to get up close and personal with the enemy.

In his showcase video, we get a sneak peak at the water starter’s moveset:

Blast your enemies away in with Blastoise’s Unite moveset

Blastoise’s Unite moveset looks insanely strong, as it melts both Venusaur and Charizard in his showcase video.

TiMi studio is constantly adding new playable Pokemon and it doesn’t look like its looking to stop anytime soon. Both Mamoswine and Sylveon have already been teased. Who else could be next?