The stock car racing Hall of Famer is “strictly” a PC gamer. 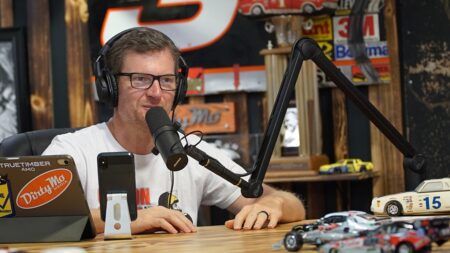 Claiming to be an avid PC gamer since the 1990s, Earnhardt Jr. admitted that this was his first experience putting a rig together from scratch. His enthusiasm in custom-building a powerful gaming machine should come as no surprise, though. Aside from being an avid fan of sim racing, his professional background and experiences in fine-tuning race cars should make buidling PCs feel like second nature.

“I would often get asked what I’d be doing had the driving thing not worked out,” Earnhardt Jr. tweeted. “IT work of some sort would have been really rewarding for me.”

“Chasing technical problems and helping others with their own systems is something I enjoy.

He didn’t quite go into detail about his rig’s specs under the hood, but we can speculate from the photo that the PC uses an EVGA GeForce RTX 30 Series graphics card, a G.Skill Trident Neo Z RAM kit, and what looks like a NZXT Kraken Z73 cooling system.

2020 saw several world-famous celebrities — from fellow motorsport pros like Lando Norris, to movie stars like Henry Cavill — flaunting their passion for esports and video games. With COVID-19 putting live events on hold indefinitely, virtual renditions of the world’s favorite sporting events have emerged as viable alternatives to the real thing like never before.

While Earnhardt Jr. is better known for his success as a NASCAR driver and his keen analyses of the sport, he is also increasingly becoming a prominent figure in the sim racing scene. In November, he officially joined iRacing’s management committee, assuming the role of executive director.

But despite taking on the formal role just recently, he has long been contributing his extensive knowledge and experience to develop better sim racing experiences for motorsport fans around the globe.

“For more than 20 years, Dale has been a passionate advocate of sim racing whose efforts to improve the product have dramatically shaped our direction as a company and relationships throughout the sport for the better,” iRacing owner John Henry said. “Through all this time, he’s never been paid a penny for his contributions.”

Dale Jr. represents the third generation of a full-fledged Earnhardt family dynasty in NASCAR. His grandfather Ralph was a seven-time NASCAR Cup Series champion, while his father Dale Sr. always figures in the conversation when it comes to the greatest NASCAR drivers of all time.

While he may not have a NASCAR resume that’s as decorated as his father’s, Earnhardt Jr. seems best suited to play an important role as NASCAR and motorsport as a whole continue to evolve — with virtual racing becoming increasingly relevant to fans from all over the world.