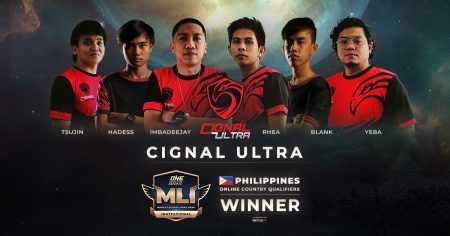 Cignal Ultra has defeated NexPlay Predator Solid with a 3-1 standing in the final of the ONE Esports Mobile Legends: Bang Bang Invitational Philippines qualifier.

While Cignal Ultra seemed to have no answer to NexPlay’s aggressive play in game one, the team quickly adjusted and won the next three in a row to secure their qualification to MLI

In game four, with Cignal Ultra looking to close out the series, Blank, Hadess, and ImbaDeejay put their team in a commanding lead with a three-kill tower-dive just two minutes into the game.

Cignal Ultra built on their lead from there and finished the game with a flashy split-lane push, with the entire team going straight for the mid-tower while the Lord marched his way through the top lane.

The prize pool for The International 2020 (TI10) has exceeded US$10 million just two days after the release of the TI10 Battle Pass.

TI10’s prize pool reached its first major milestone at around two days and 19 hours after its accompanying Battle Pass was released, according to data from the Dota 2 prize pool tracker. A quarter of the sales from the TI10 Battle Pass contributed US$8.4 million to the prize pool at that point.

For comparison, it took three days and 15 hours for the prize pool of TI9 to breach the US$10 million mark. Meanwhile, it took all other previous TIs at least 12 days to grow their respective pots to over US$10 million.

The Valorant closed beta produced plenty of amazing highlights, but our favorite is this clip from Reddit user, kray_wdym, who managed to clutch out a round on attack, despite his entire team (including himself) already being dead.

From their epic comeback against rivals Evil Geniuses in game three of the Upper Bracket Finals to the “Ceeeeeb!” play in game four of the Grand Final against PSG.LGD, the legendary championship run was fueled by equally legendary plays.

But there is one play that has gone mostly unnoticed in the eyes of many, despite it arguably being the most pivotal in OG’s championship run.

This is the story of that play.