The young star is taking even bigger strides into competitive gaming. 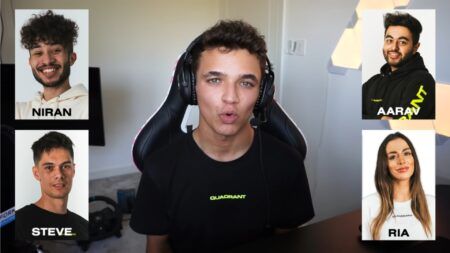 On top of his promising young career as a Formula 1 racer, Lando Norris takes pride in his passion for gaming.

Last weekend, the second year McLaren driver leveled up his involvement in the competitive gaming scene by revealing that he has put together his own professional esports organization called Quadrant.

With live circuit events slowing to a crawl this year because of the COVID-19 pandemic, professional racing competitions — like many other pro sports leagues around the world — have turned to video games as a platform to stay engaged with their fans, athletes, and corporate partners.

For Norris, these unprecedented circumstances presented the ideal opportunity to combine his two big passions. Now, not only does he moonlight as a renowned streamer on Twitch, he also has an entire squad backing him up while he’s at it.

“Quadrant is something I’ve wanted to do for a long while,” Norris said in an interview with BBC.

“The lockdown accelerated things because I was doing a lot more streaming online and getting more into it.”

While fans of the up-and-coming F1 star can expect plenty of virtual race action from Quadrant, Norris promises that his team will eventually play and represent a wide range of games.

“We are starting reasonably small but with the dream of expanding and becoming a much bigger team throughout all esports and not just racing,” Norris claimed.

This is great news for his growing legion of Twitch followers, which jumped from an already reasonably large number of 185,000 pre-lockdown to more than 680,000 at present. This number is expected to grow even more rapidly with Quadrant boosting Norris’ online presence and influence in the video game content creation scene.

For a quick glimpse at what you can expect from Quadrant, check out Quadrant’s first YouTube clip: