After 16 years, Age of Empires IV finally has a release date

We’ve been waiting for ages. 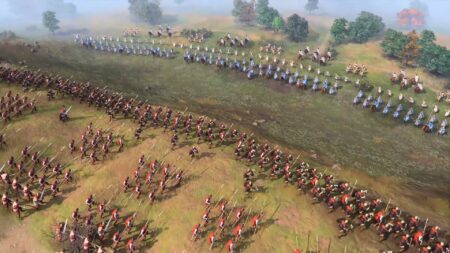 Developed by Relic Entertainment, AoE IV looks like a worthy modernized update to the iconic real-time strategy (RTS) game and provides much of the same thrills that many longtime fans experienced in its earlier titles.

Just from the gameplay trailer, players can expect a more high-definition look to bustling empires and landscapes that easily trump AoE’s various remasters throughout the years.

One interesting highlight of the reveal was the ability for buildings to pack up, making it easier to relocate once you’ve depleted your resources. Seeing as how the RTS genres usually venture into long sessions of playtime, Relic could be adapting AoE IV’s gameplay to be more fast-paced to fit the current gaming atmosphere.

As for units, players can await the return of the converting Priest and his “wololo” chanting. While taking a backseat in AoE III as a healer unit, the Priest can now convert armies of opponents with the use of a relic.

In terms of content, Relic has revealed four out of eight civilizations that will be available on release: English, Mongols, Chinese, and the Delhi Sultanate.

The developers also unveiled one out of four campaigns, the Norman Campaign, in which you take on the life of William of Normandy and his journey to conquer England and seize its throne.

Age of Empires IV is slated for a Fall 2021 release on PC.

You can watch the official gameplay trailer down below:

READ MORE: After 24 years, EA is releasing the source code for Red Alert