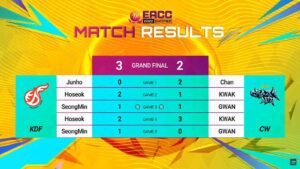 In the final, the Freecs faced rival Korean team CrazyWin, who looked formidable after beating DHFC by 3-2 and ProGamer by 3-1.

While CrazyWin took an early lead after winning game one, KDF quickly retaliated with two back-to-back victories. KDF Hoseok stepped up in game two, evening out the scoreboard with a clutch goal by Gianluca Caprari inside the penalty box.

But KDF SeongMin was the star of the series, winning game three through a thrilling penalty shootout. After securing a 6-5 shootout lead, SeongMin successfully blocked CW GWAN’s slower, grounded shot to claim the game three victory.

After CrazyWin tied things up in game four, the last game of the series turned into a rematch between SeongMin and GWAN.

In extra time, SeongMin flexed his dribbling skills on Karim Benzema. Once he got rid of a defender inside the penalty box, the KDF star immediately scored for a 1-0 lead at 94 minutes. With GWAN not able to equalize the score, Kwangdong Freecs won the series 3-2 and secured their first-ever EACC Summer 2022 title.

As EACC Summer champions, the Freecs took home the prestigious EACC trophy as well as US$35,000. Runners-up CrazyWin received a cash prize of US$18,000.