What will happen in DOTA: Dragon’s Blood Season 2?

Could Mirana be the star of Book Two? 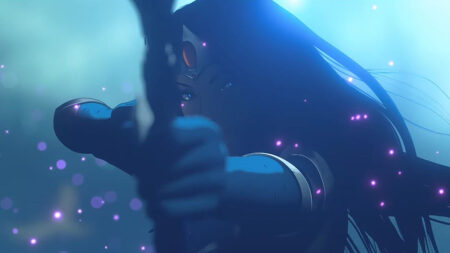 If there was an award for the biggest cliffhanger to ever exist, the ending of DOTA: Dragon’s Blood Book 1 would be right up there.

To recap: War has broken out amongst the Dark Moon Order and the suppressed Coriel’tauvi, Davion was captured by Kaden, Selemene took a beating from Terrorblade, Luna begged Mirana for help, and Fymryn looked to go on a mission to save Davion.

Luckily for fans of the series, Valve have officially announced that Book 2 is in the works!

With so much going on at the end of Book 1, it’s hard to predict what the show will focus on in Book 2. But we’ll give it a go anyway.

I’m inclined to believe that Mirana will get a lot of the spotlight in Book 2, especially with how everything ended during the season finale.

Upon opening the box containing the Lotuses of Mene, a bright beam pierced the sky and shrouded the moon, stripping Mirana, Luna, and the Dark Moon Order of Selemene’s blessing. Seeing them in a weakened state, the Coriel’tauvi saw this as an opportunity to get the jump on the Order.

In all the Chaos, Mirana rescued Luna who was almost killed off by Fymryn and the two seek shelter deep in the woods. Well away from all the fighting, it’s here where Luna admits she cannot lead the Order and pleads for Mirana to lead them home as their Princess.

This is an important part of Mirana’s story arc because up until now, she had been questioning her identity to the point of calling herself a “Princess of Nothing”.

In that moment, if Luna was talking to the Mirana we saw in episode one, she’d immediately decline and lay the responsibility on Luna to lead the Order. Instead, we witness a big growth spurt in Mirana’s character development where for once, she looked ready to reclaim her responsibilities as Princess of the Moon.

So what does this mean for next season?

My theory is that we’ll see more of Mirana’s backstory before she devoted herself to Selemene in Book 2.

During her visit with the shopkeeper, we got a glimpse of Mirana’s past and future where we see her as a child, her current self, and a mature version of herself with her hair done up. I don’t think this scene was a coincidence but rather foreshadowing something greater. Mirana finally walking the path towards her destiny as a great leader.

With all the fighting going on, how will Mirana deal with the vengeful Coriel’tauvi? Unlike Luna who uses fear to intimidate her foes, Mirana is her polar opposite. Can the Princess peacefully settle the fighting between the Dark Moon Order and the Coriel’tauvi?

What of Selemene, the one who originally banished the enclave from the Nightsilver Woods and murdered Mene? Will Mirana eventually question her faith to the Moon Goddess if there is a reason for her to believe that Mene actually existed?

The Princess of the Moon won’t get all of the spotlight in book 2 but I do think her character will receive the most attention moving forward considering how things ended.

This doesn’t mean we won’t see more of Davion or Fymryn but it’ll be interesting to see how the inevitable reunion plays out. Will Mirana and Fymryn still hate each other or will the two finally see eye to eye? Will Davion perish in Slyrak’s place or will the Dragon Knight learn to tame the ancient eldwyrm? What happens to Selemene now that Invoker has gotten his revenge?

There are a lot of questions that need answering but we’ll need to be patient. Our questions will be answered next season.

READ MORE: Netflix’s ‘Free-to-Play’ documentary takes you back to the very first The International