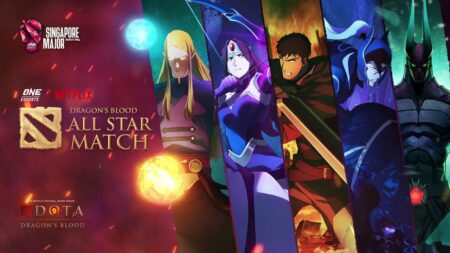 On the final day of the ONE Esports Singapore Major, fans were treated to a unique all-star match featuring ten of Dota’s most well-known personalities as Team Netflix took on Team ONE Esports.

The match was cast by Shannon “SUNSfan” Scotten and Andrew “Jenkins” Jenkins.

The rules of the game were simple. Every few minutes, the teams were asked a trivia question about Netflix’s Dota: Dragon’s Blood anime. Correct answers would earn a unique buff for that team.

Unsurprisingly, the match was absolute mayhem. Here are our top five favorites moments:

The players knew what they were in for when the whole map was devastated by multiple Elder Titan Earth Splitter ultimates all over the map in the first minute of the game.

Watching everyone duel each other was amazing to watch. Especially when Waga won five straight duels and got a 50 bonus damage increase in a span of 25 seconds.

3. Back-to-back TI champs by the way

Long-time teammates and Dota 2 hall of farmers N0tail and Ceb faced one another in the showmatch. The two clearly had a blast facing each other and gave the fans some interesting new voice lines to repeat.

In an attempt to keep Team Netflix in the game, the game moderator awarded the Radiant team a spam of Snapfire Cookies to use against the Dire squad.

Late in the game, every player got pulled into one massive Black Hole in the center of the map, resulting in the biggest of team fights. After the dust had settled, it was Team Netflix still standing, and they went on to win the game.

Watch the full match on the ONE Esports YouTube channel!

READ MORE: Invictus Gaming win the Singapore Major with one of the greatest comebacks of all time