Gambit Esports’ captain tells us about rebuilding a roster from the ground up and the team’s early season success. 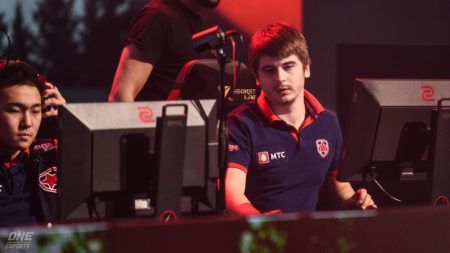 We caught up with Gambit Esports captain, Artsiom “fng” Barshak, at the ONE Esports Dota 2 Singapore World Pro Invitational to talk about how he rebuilt the team, and their ambitions for this season’s DPC.

You’re the only player remaining from last year’s Gambit roster. Can you tell us how this season’s lineup came together?

Fng: I wasn’t alone in doing it, I had Gambit coach Nikolay “distilled” Prokhorenko too. He’s not well-known to the public, but he stayed with us. I talked with him about how we want to build the team, what do we need to have a team, and what kind of changes we want to make.

How did you recruit the other four members of Gambit? Let’s start with your mid player, Danil “gpk” Skutin.

Fng: Our idea for the team was to mix experience with new blood. Gpk was well-known after the qualifiers for TI8, and everyone was looking to get him but he joined us.

Fng: We had a bunch of different players we wanted to get at Position 1, but we chose dream because we spoke to him and we looked at his replays, and we were like, “This is what we need.”

What about your offlaner, Maxim “Shachlo” Abramovskikh? You guys have a bit of history together.

Fng: Trying to get a good Position 3 was the hardest part, but we ended up with Shachlo. We joked a lot about it because he was like, truly on the bottom of our list. But we were like, “Okay, we don’t know what to do to find a player but I know this guy, I played like, three or four years ago with him. He’s a good guy, let’s go with him.” Then we tried him out and everyone liked him, so here we are.

And finally, what about your Position 4 player, Danial “XSvamp1Re” Alibaev?

Fng: As for XSvamp1Re, some other players said we should try this guy because he’s really good, and we liked him.

Has the plan to mix veterans with newer players been working out?

Fng: We still have problems, even right now. It all takes time, there is no short way to do it, it always takes time. I’m not a TI winner, I’m not a god who knows everything. I’m still learning myself how to do things right. I’m just trying to share my experiences with them that I think they should get. There’s always something that could go wrong and that’s a new experience on how to solve this problem.

It’s an extremely hard process, but I work as hard as I can. It’s a good feeling for me whenever I go up against hardships and overcoming them.

What can you say about your team’s start to the season? Most people didn’t expect you guys to qualify to Chengdu over more established teams in the CIS region like Virtus.pro or Natus Vincere.

Fng: I would say the start of the season was super good for us, but the issue is it was also a very hard schedule for us. Plus, we are a new team. I want to go back to the moment we first played in the qualifiers for the Chengdu Major. We had a one-month bootcamp as a new team, so we bootcamped hard, win the qualifiers, then go to the Major.

You guys have been grinding a lot of events, from the Major qualifiers, then ESL One Hamburg 2019, and then the Major itself. Do you think that has affected your performance so far?

Fng: We went through that then, but now we don’t have the time to practice hard for something compared to when we bootcamped the first time.

We went through ESL, which was kind of part of our bootcamp, then we went from ESL to the Major in the span of two weeks. But we also needed to rest. We couldn’t prepare that much for the Major, but it’s the same as other teams and I’m not blaming that for our loss there.

Is that also the case for the Singapore Invitational?

Fng: For this tournament, we came here basically after the Major. After we went home, we had 10 days to rest, play some scrims, and then the [Leipzig Major] qualifiers. Plus, the new patch hit around that time. It’s a tough schedule, but there’s nothing we can do about it.

What do you think of the state of the team right now? What are some things you think you need to work on?

Fng: We have a lot of room to grow, not just as a team, but as players. We need to widen our hero pools and we need to get better strategy-wise. We all have heroes that we like to play, like every player in Dota has five heroes he likes to spam non-stop. But in the competitive scene, it’s not about your favorite heroes. It’s about heroes that will win you the game, it’s basically what I feel like we need right now.

But that’s only like 50% of what we need to work on though, the other 50% is our improving our communication and stability and so on.

What are your plans now for the coming new year?

Fng: I hope that we can just take a good break, then have a long bootcamp so that we can achieve some very good results next year.