Gambit surprised the Group A winners in the first game of the Main Event. 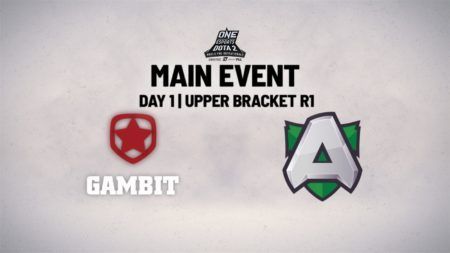 With the Group Stage over, the ONE Dota 2 Singapore World Pro Invitational continues with the Main Event stage of the tournament.

The first series of the day featured a surprise upset as Gambit Esports outplayed Alliance, taking a 2-0 series sweep.

To start the match, Alliance decided to go with a first-picked Viper for Nikolay “Nikobaby” Nikolov and Brewmaster for Neta “33” Sharipa. They closed out their draft phase with two strong supports consisting of Ogre and Earth Shaker for Adrian “Fata” Trinks and Simon “Handsken” Haag respectively.

Alliance’s Ogre Magi and Earthshaker tandem started roaming around the map early, and this led to quick and easy kills for the European team. Handsken was able to land clutch Fissures that cut off escape paths for their opponents.

Gambit answered back by taking down Nikobaby’s Viper at the top lane with a four hero rotation.

Gambit attempted to keep up their aggressive play, but with Linus “Limmp” Blomdin’s Tiny joining the team fight, the CIS squad was forced to retreat.

Alliance tried to get a quick Roshan kill, but this eventually led to a completely one-sided team fight for Gambit. Handsken was only able to land his Echo Slam on gpk, which left the door open for Gambit to win the team fight.

Alliance was able to shock their CIS opponents by winning a team fight despite 20,000 gold deficit but it wasn’t enough to spark a comeback.

Gambit’s gold and experience lead were way too much for Alliance to deal with and Nikobaby’s Viper struggled to find farm the entire game. After two Alliance heroes went down just outside the Dire base, Gambit pushed to end the game.

For game two, Alliance decided to go with Ogre Magi and Tiny as their first two picks. Then they finished their draft with an Anti-Mage for Nikobaby. Meanwhile, Gambit chose a first picked Doom Bringer. Then, they went with a Puck for gpk in the middle lane, along with a Lone Druid and Morphling for their final core hero picks.

Similar to game one, Alliance dominated the laning stage with Limmp out last-hitting gpk’s Puck in the middle lane. Alliance’s bottom tri-lane also helped Nikobaby reach the top of the net worth chart.

Both teams traded evenly once the game went past the 10-minute mark. But, the pressure started to mount for Nikobaby, who ended up being the only hero on the Alliance squad with high tier items.

Gambit was able to break the deadlock after an amazing team fight at the middle lane when Nikobaby’s Anti-Mage preemptively blinked to the frontline. This gave Danial “XSvamp1Re” Alibaev’s Doom Bringer the perfect opportunity to cast his ultimate and shutdown Alliance’s hard carry.

With the better team fight lineup, Gambit decided to continue with their pressure and forced their opponents out of their own Radiant jungle and stopped a middle lane tier-one Tower push.

Alliance was able to bounce back against Gambit by using three crucial buybacks on their heroes. Gambit was a bit overconfident with their lead and overextended instead of just retreating and securing their late-game advantage.

After securing the Aegis of the Immortal and Cheese, Alliance decided to take another team fight that cost them gravely. XSvamp1Re landed a clutch blink into Stomp and Doom combo that initially shutdown Nikobaby.

Gambit totally wrecked the rest of Alliance’s heroes while Nikobaby — who was the Radiant team’s primary damage dealer — waited to respawn with his Aegis of the Immortal. After winning a convincing team fight inside the Dire jungle, Gambit ran straight to the Radiant base and finished the game.

With their 2-0 victory, Gambit secured a top 3 finish at the tournament. They are now set to face the winner of the next Upper Bracket match between Evil Geniuses and Team Secret.

Meanwhile, Alliance drops to the Lower Bracket where they await the winner of Virtus Pro vs Natus Vincere.