What can we say, the guy just loves to win. 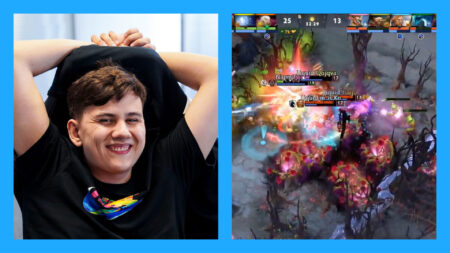 Stars continue to align for Team Nigma at the Dota 2 WePlay AniMajor. Carry player Nigma iLTW impressed everyone with a Rampage on Ursa during their series against Team Liquid.

Like a crazy bear on the loose, Igor “iLTW” Filatov managed to catch and kill Tommy “Taiga” Le’s Dark Willow, who was already low in health during this late-game clash.

Then, Nigma iLTW decided to prey on Sumail “SumaiL” Hassan’s Morphling, but only got so far before he was surrounded by the rest of Team Liquid.

With only a small amount of HP left on Ursa, Maroun “GH” Merhej’s Io teleported iLTW to safety.

GH’s chosen location for the teleport not only saved iLTW’s life but also gave him the opportunity to send Max “qojqva” Bröcker’s Centaur Warrunner to the grave.

GH’s save drastically turned the tides in Team Nigma’s favor. After killing qojqva’s Centaur, iLTW picked on Taiga’s Dark Willow for the second time after the latter bought back.

Nigma iLTW then went on to finish what he started earlier, and killed SumaiL’s Morphling.

The rest of the Nigma crew chipped in to iLTW’s Rampage by helping to take down miCKe’s Omniknight, and finally Aydin “iNSaNiA” Sarkohi’s Snapfire.

The series ended with a solid 2-0 for Team Nigma. They are now tied with TNC Predator, Evil Geniuses, and Vici Gaming with a 5-3 record.

Nigma GH is the best babysitter in town

Of course, we have to give credit to GH’s Io who sustained iLTW’s aggressive Ursa throughout the teamfight.

GH did 25,000 in healing in this match alone, winning not just the bot lane, but the whole game as well for Team Nigma.