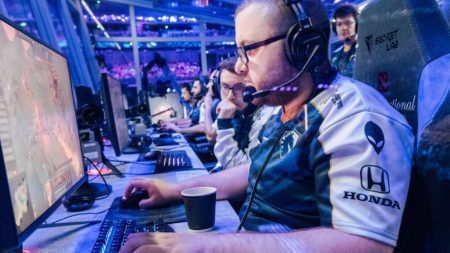 With three teams left in the tournament and China’s last hope for a TI winner on home soil doing their best to claim victory, it came down to a series featuring an unyielding Team Liquid and PSG.LGD just losing their form and crumbling.

Having been sent to the Lower Bracket Final by OG, PSG.LGD had a lot to play for. Pride, country, glory, and a chance to be first-time TI winners.

Team Liquid, on the other hand, was on a 9-0 win streak coming into the series, having defeated Fnatic, TNC, Royal Never Give Up, Evil Geniuses, and Team Secret.

After a dominating game one win for PSG.LGD, Team Liquid bounced back with an amazing game two comeback victory. And with so much momentum on Team Liquid’s side, they managed to eliminate the final Chinese team in the tournament during game three.

Right at the start, Liquid decided to go with the Tiny, Faceless Void, and Tinker, with the last for Aliwi “w33” Omer. In response, PSG.LGD banned the Alchemist and picked one of Xu “fy” Linsen’s best heroes, Rubick. They then gave Gyrocopter to Lu “Maybe” Yao and Spectre for Yang “Ame” Chunyu.

Both teams looked evenly matched and traded the same amount of kills as the early phase progressed. But PSG.LGD’s draft started to come together and Fy began to take over the game by stealing key abilities and ultimates.

While PSG.LGD looked to secure Roshan, Amer “Miracle” Al-Barkawi jumped into the Pit and claimed Roshan together with the Aegis of the Immortal. With PSG.LGD forced to run back, Fy was able to save Maybe with his Force Staff.

Looking to take down more PSG.LGD heroes, w33 decided to jump into the enemy team’s Shrine and was punished for overextending. Fy stole Time Walk and Avalanche to control Team Liquid’s heroes.

PSG.LGD continued to build on their lead by taking down Roshan, and then they quickly hunted down Liquid’s heroes. Instead of waiting for Radiant heroes to respawn, Liquid met PSG.LGD head-on and this decision cost them their structures.

After a successful defense on Liquid’s side, PSG.LGD regrouped and stormed the Radiant base where they finished game one.

With Liquid one game away from elimination, they decided to go with a Templar Assassin on W33 and a Sven for Miracle; PSG.LGD responded with a Lifestealer, Centaur Warrunner, and an unexpected Huskar pick for Maybe.

PSG.LGD took the early lead against Liquid and dominated all lanes. They kept building on their advantage with Ame and Maybe topping the net worth chart.

Liquid answered back when their opponents tried to claim Roshan, forcing PSG.LGD to burn buybacks on Centaur Warrunner and Jakiro, but Liquid still managed to secure the Aegis for Miracle.

PSG.LGD looked to be in complete control during team fights. Yang “Chalice”‘ Shenyi caught out both Rubick and Templar Assassin, which forced Liquid to retreat.

With a 13,000 gold lead, PSG.LGD pushed into the Radiant base and took the middle set of Barracks. But, with multiple buybacks by Team Liquid, PSG.LGD was forced to back off.

Six minutes later, PSG.LGD tried to finish the game yet again, but this time around, Chalice was caught too far forward and with another pickoff on Maybe, Liquid took out more enemy heroes.

With both teams knowing how important the next Roshan pick up would be, PSG.LGD walked into Liquid’s high ground advantage and Ivan “Mind Control” Ivanov landed a Vacuum that stopped Centaur and Jakiro from running away. Team Liquid then ran down the rest of PSG.LGD’s heroes.

Ame tried to force Liquid’s heroes back to defend their base, but Maroun “GH” Merhej was able to kite the Lifestealer while Liquid took down the Dire Throne.

During the final game, PSG.LGD went with Rubick for Fy, Faceless Void for Ame, and Shadow Fiend for Maybe; while Liquid went with a Templar Assassin for w33, Wraith King on Miracle, and Tide Hunter for Mind Control.

w33 completely owned the middle lane, while Miracle had a great start, farming his Hands of Midas nine minutes into the game. But it was Mind Control’s map rotations that helped Liquid secure an early game advantage.

PSG.LGD managed to defend their base, but it cost them multiple buybacks and gave Team Liquid an even larger gold lead.

With a massive lead of 27,000 gold for Team Liquid, PSG.LGD just could not keep up during team fights. Liquid continued to take down objectives and PSG.LGD was forced to tap out with a GG.

With that, Team Liquid advanced to play OG in the Grand Final against OG — it will be a match between TI7 champions vs TI8 champions, with the winner walking away with US$15.5 million, a huge chunk of the largest esports prize pool in history.

As for PSG.LGD, they exit TI9 with a third-place finish and will take home US$3 million in prize money.