Are Liquid back? Are they doing it? 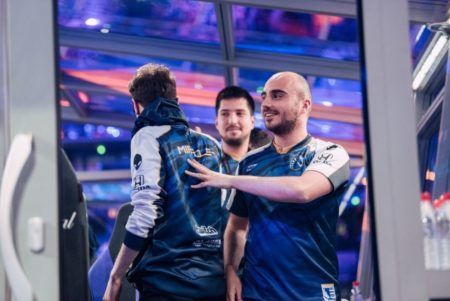 https://www.facebook.com/oneesportsgg/videos/727884287676900/After a dismal Group Stage, TI7 winners Team Liquid seem to have returned to their status as championship contenders with a 2-0 sweep of a surging Royal Never Give Up (RNG) in the opening Lower Bracket match of Day 3 of The International 2019.

RNG picked up a core duo of Lifestealer for Du “Monet” Peng and Ember Spirit for Gao “Setsu” Zhenxiong, but Liquid countered with a highly-aggressive lineup of Gyrocopter for Amer “Miracle-” Al-Barkawi — with Maroun “GH” Merhej on Io to support him — Aliwi “w33” Omar on Tiny, and Ivan “MinD_ControL” Ivanov on a surprise pick Night Stalker.

The game started off relatively slowly as both teams jostled to get favorable lanes, including a stretch where both teams’ cores resorted to jungling while waiting for a good laning matchup to appear. But Liquid came out of the laning phase looking better, as they made aggressive moves around the map while letting Miracle- free farm.

With Miracle’s Gyrocopter armed and ready, Liquid went on the offensive and even dived RNG to their tier three tower to seize the advantage. The Chinese squad tried to gank Liquid to regain momentum, but Liquid turned them back repeatedly to further their lead.

The Nighstalker pick for Liquid showed its worth in the later stages of the game, stopping RNG’s cores from casting their spells and leading his team in running them down. Liquid would later catch out Setsu without buyback, forcing RNG to call GG soon afterwards. Miracle notably had a tour de force on his Gyrocopter, finishing with a clean 12/0/11 KDA.

RNG picked Gyrocopter for Monet themselves in game two, with Setsu on Outworld Devourer and Flyby on Enchantress. Liquid countered with a late game-oriented, high-damage lineup with Miracle on Arc Warden, w33 on Tiny, and MinD_ControL on Sand King.

With heroes that come online much earlier, RNG put a lot of pressure on Liquid early to try and slow down Miracle’s farm. While the Chinese squad were able to score a couple of kills on him, their opponents repeatedly got rebuttal kills of their own.

With Miracle starting to get into fighting shape, Liquid made aggressive moves of their own but Setsu took over the ensuing fights for RNG.

With Liquid on the backfoot, RNG had the opportunity to take a sizable advantage but they threw that away by diving deep into the enemy base. Liquid punished their overextension by killing Setsu, which then let them draw the game out and get their lategame power spike.

A deadlock ensued as Liquid couldn’t fight into RNG’s five-man lineup, who in turn could not breach Liquid’s high-ground defense led by Miracle. A fight at Roshan saw Liquid bursting down two of RNG’s heroes as well as Roshan, forcing their opponents to huddle in their base.

The game turned into a long war of attrition, with Liquid repeatedly trying to chip away at RNG’s base — only managing to take the first barracks 75 minutes in — while the Chinese struggled to repel them without expending too many buybacks. Liquid got their chance to threaten RNG’s ancient when they picked off their two supports without buyback, which forced the Chinese squad’s cores to use their own buybacks to hold their base.

RNG would later make a daring offensive into Liquid’s side of the map in which they managed to kill Miracle without buyback, but with their whole team was wiped in return. With their base left defenseless, the Chinese squad eventually conceded the series.

RNG bows out at 7th-8th place and over US$840,000 as consolation. Meanwhile, Liquid will continue their run in the Lower Bracket with a showdown against Evil Geniuses later today.