EG finishes the Group Stage 9-1 and at the top of Group B. 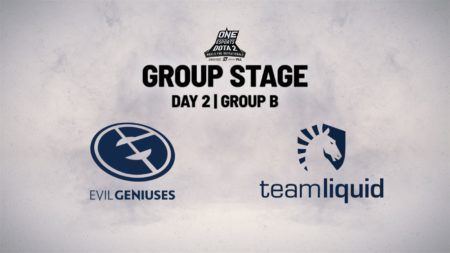 Evil Geniuses finished their Group Stage run by destroying a disinterested Team Liquid squad, who were already eliminated from the tournament after losing their earlier match against Na’Vi.

For the first game of the match, with nothing on the line, Team Liquid decided to try out a new and unproven draft against EG.

Liquid’s team captain, Aydin “iNSaNiA” Sarkohi drafted a position 5 Chaos Knight for himself. Then, he picked an Invoker for Michael “miCKe” Vu who moved to the middle lane, and a Terror Blade for Maximilian “qojqva” Brocker.

Meanwhile, EG went with heroes that were doing well in the tournament. They went with the Naga Siren, Templar Assassin, and Tide Hunter for their core heroes.

miCKe’s Wex-Quas Invoker was able to repel EG’s gank attempts during the early phase of the game.

With a massive 19,000 gold lead advantage on EG’s side, Team Liquid had no way to defend their Dire base. qojqva was able to land a timely Sunder on Ramzes that stopped EG’s Dire base siege.

Samuel “Boxi” Svahn on the Lycan failed to farm his Aghanim’s Scepter and was forced to run back to his base and joked in all-chat that he couldn’t use items because his game was bugged. EG playfully answered back and asked him to run towards the fountain while body blocking Boxi’s hero.

For the following game, Team Liquid drafted a Dazzle for miCKe as their hard carry hero. Meanwhile, EG decided to go with their own entertaining draft choice with a Techies pick for Andreas “Cr1t-” Nielsen.

EG’s draft with heroes with superior team fight abilities ended up destroying their European opponents. To keep the spectators entertained, Abed even went for his own cliff play on qojqva during a Radiant jungle team fight.

EG continued to rack up their kill score against Team Liquid and secured a Dire team wipe at the 21-minute mark. It didn’t take much effort from EG to melt Liquid’s heroes, specially when Artour “Arteezy” Babaev was buffed by Abed’s Empower ability.

Tommy “Taiga” Le baited Abed into going for another cliff play and outsmarted the Magnus. But, EG could’ve ended the game at any moment they wanted. Team Liquid decided to end their tournament run after Abed caught two of their heroes right outside the Dire fountain.

With a 9-1 record, Evil Geniuses cemented their spot at the top of Group B. They will be advancing to the Upper Bracket where they’re set to face Team Secret. Meanwhile, Team Liquid crashed out of the tournament with a dismal 1-9 finish.