Gambit move on the Upper Bracket of the Main Event, but PSG.LGD will be going home after a disappointing showing. 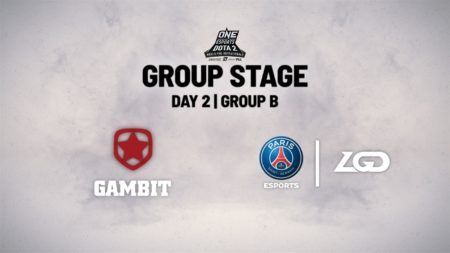 Gambit opened the series with a high-damage tri-core, with Kiyalbek “dream ‘” Tayirov on Terrorblade, Danil “gpk” Skutin on Viper, and Maxim “Shachlo” Abramovskikh on Timbersaw.

Gambit held a comfortable early lead after the laning phase thanks to their stronger laning heroes, and were content to keep farming well into the midgame. But when they attempted to take Roshan at the 20-minute mark, PSG.LGD caught them unawares and swung the momentum their way.

Gambit was able to strike back and keep themselves in the game, but by that point PSG.LGD’s cores were far too powerful to stop and they were forced to call GG after 44 minutes.

With their tournament life on the line, PSG.LGD rolled out a teamfight-focused composition of Ember Spirit for Ame, Magnus for Somnus once more, and Dark Seer for Chalice against Gambit’s strong pickoff lineup with dream on Ursa, gpk on Templar Assassin, and Schachlo on Batrider.

Unfortunately for PSG.LGD, Gambit led after the laning phase and never looked back, as they dominated in virtually every teamfight they took. The beleaguered Chinese squad tried to claw their way back into the game, but they could not stop their opponents from taking over the map.

Despite PSG.LGD’s best efforts to hold their base, Gambit relentlessly delivered assault after assault and eventually forced the GG call from their opponents in just under 32 minutes.

Gambit finished the Group Stage in second place in Group B, and will face Team Secret in the Main Event Upper Bracket.

Meanwhile, PSG.LGD’s woeful start to the season continues as they bow out of the tournament with a disappointing 3-7 record. Last month, the previously top-ranked Chinese team also crashed out of the Leipzig Major Open Qualifiers.