PSG.LGD is now on the brink of elimination with a disappointing 2-6 record. 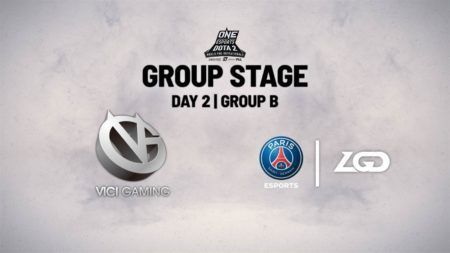 Vici Gaming and PSG.LGD finished their Group Stage match with a 1-1 draw. After being outplayed by PSG.LGD in game one, Vici Gaming managed to bounce back and earn an impressive game two victory that will help them advance to the Main Event.

VG tried to chase down and get a quick pickoff on Ame, but PSG.LGD was able to reach their hard carry right before he died and were able to punish their Chinese rivals for overextending. With a Tiny, Vengeful Spirit, and Magnus on LGD’s lineup, they were able to displace VG’s heroes and win a crucial team fight by the Rosh Pit.

VG managed to stay in the game thanks to a clutch Duel by Zhou “Yang” Hiyang, but that only prolonged PSG.LGD’s inevitable game one victory.

PSG.LGD closed out the game with an amazing Reverse Polarity ultimate by Somnus that caught three VG heroes. With the Radiant base falling apart, VG was forced to tap out of game one.

For the following game, VG decided to draft Slark and Blood Seeker, two heroes that fill the same rolls that have different power spike timings. Meanwhile, PSG.LGD decided to go with a Morphling and Kunkka as their hard carry and mid hero.

Despite winning most of the early game clashes, PSG.LGD failed to gain a significant gold and experience lead against VG and, once Eurus was able to farm an Aghanim’s Scepter on his Slark, VG broke the stalemate and took the advantage.

PSG.LGD continued to fall apart and had no answers against VG’s core heroes. Ame on the Morphling kept getting isolated by Pyw’s Disruptor. VG ended game two at the 40-minute mark and finish the match with a 1-1 draw.

Vici Gaming’s game two victory puts them in fourth place in Group B with a 4-4 record, while PSG.LGD is on the brink of elimination with a 2-6 record.