“I would always just listen and learn from them.” 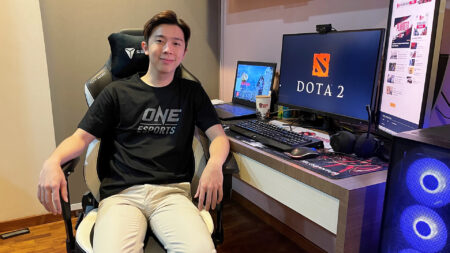 The dream for most gamers who are drawn into competitive gaming is often the same: We want to be able to play well enough to go pro. We grind as many games as we can, trying to improve and climb the ranks in the hopes that we reach the top of the pyramid, where the world’s best esports pros sharpen their skills.

Most of the players featured on ONE Esports are those who were able to get there and compete against the best in the world. But there are also those who are equally talented, who put in just as much work, but weren’t able to chase their dream of going pro, because they were told to pursue more stable career opportunities.

This is the story of Julian Chee, ONE Esports’ new Business Analyst.

Julian was fascinated by games at a young age. He spent a lot of time playing MMORPG games like Ragnarok and Maplestory, but his true passion was competitive titles like Dota and Counter-Strike.

“What really intrigued me with Dota is just how high the skill cap was. You could be playing Dota for 10 years, but you might not still understand the game,” said Julian.

As Julian climbed the Dota 2 leaderboards, he realized he enjoyed competing against more highly skilled players compared to playing with his friends.

“I really wanted to dive deeper into the game to understand the mechanics at the highest level and learn the intricacies of the game. This is when I grinded solo MMR and climbed the leaderboard. This was the time when I enjoyed playing the game every single day.”

Julian describes himself as a very competitive person, and playing in high ranked matches was the perfect way for him to truly test himself. “It became a platform for me to unleash my competitive spirit,” he explained.

Growing up, Julian represented Singapore’s National Youth team in Badminton. But when he left the team, he had to find another outlet to channel his competitive fire. This is when Julian started playing Dota about 17 hours a day.

Through his hard work and dedication, Julian reached 6,033K MMR in 2015, earning him the 117th spot on the Dota 2 SEA regional leaderboard.

Julian then hit a peak MMR of 6,900 the following year. This is the equivalent of the Immortal ranking now in Dota 2, where most pro players are ranked. Julian was also highly ranked in CS:GO back in the day, having achieved the Legendary Eagle Master rank.

Julian remembers ranked games laning against former TI5 champion Sumail “SumaiL” Hassan. “Matches against high-level pro players happen so fast. If you TP two to three seconds late, a team fight could be lost. I even remember playing with TI3 champion Gustav “s4” Magnusson, who would call the shots for the team. I wasn’t a pro player, so I would always just listen and learn from them,” said Julian.

While playing against these world class esports athletes, Julian began learning how different the pace of the game is when professional players are involved. “To me, it may not make any sense, but I would just do it. Then you’d suddenly see a smoke gank break out, and then you’re immediately there to defend your carry. The speed of the game took me by surprise.”

The second revelation Julian had playing against the pros was how mechanically gifted they are at playing the game. “I remember playing Puck against SumaiL’s Queen of Pain in the midlane. I should have had the matchup advantage, but he was able to reach level 6 while I was still level 4.”

The experience showed how much you need to work and learn if you want to be on the same level as the best esports players in the world. Right around this time, Julian was preparing to go to university, which prevented him from spending the same amount of time playing. Growing up in Singapore, he was advised by his parents to follow a more conservative career path and went into the banking sector.

Julian became highly successful in his professional career, joining one of the foremost investment banks in the world, Goldman Sachs, as a Global Markets Analyst.

After just under one and a half years at Goldman Sachs, Julian decided to change careers and take a job at ONE Esports as our new Business Analyst. “I wanted to wake up feeling excited every day,” said Julian. “I saw it as a risk worth taking while I’m still young because if not now, then when.”

Despite already achieving so much in his field, Julian’s passion for esports has never waned.  He continues to follow the scene and has remained a part of the gaming and esports community as an avid fan, which is what led him to a job at ONE Esports.

“I want to contribute to the growth of the gaming industry such that it is big enough that the younger generations will not have to give up on their dreams and pursue other more conventional paths like how I did.”

READ MORE: The 5 most insane moments from the Singapore Major All-Star Match