joinDOTA is shutting down after 11 years

One of the OGs. 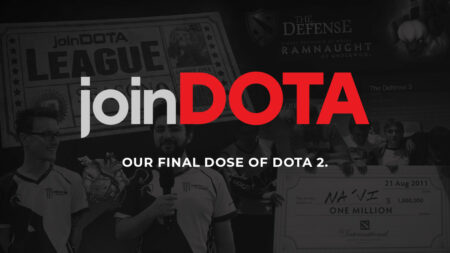 JoinDOTA, one of Dota 2’s earliest pioneers in tournament organizing, broadcasts, and editorial coverage, will officially shut down on March 31, 2022.

“The decision was made after much mulling over about the Dota 2 ecosystem and where we want to fit within and continue to grow with the community,” JoinDOTA wrote in an article released yesterday.

JoinDOTA organized the inaugural The International tournament in 2011 at gamescom, marking the beginning of an esport that has since bloomed into prize pools that make players multi-millionaires and millions of viewers tuning in for its biggest tournaments.

“All in all, joinDOTA has been an important community not just for the Dota 2 scene but the esports and gaming ecosystem overall,” JoinDOTA wrote. “It has also provided a gateway for enthusiasts and volunteers into esports, with many of them still working in the industry to this day.”

Outpouring of support for joinDOTA from Dota 2 community

Austin “Cap” Walsh, a Dota 2 caster, credited joinDOTA with giving him the opportunity to work “full-time… as a commentator.”

“I was able to quit my job/military,” Cap wrote. “Because of that, I’ve traveled the world, met my wife and closest friends, have a career, and direction in life.”

“jD paved the way for a lot of friends and colleagues,” Jonathan “PimpmuckL” Liebig, a Dota 2 observer and producer, wrote. “Casting on the community channel was such a big thing for me back then.”

While the site might be no more, Freaks 4U Gaming, the company behind it, “will still be running Dota 2 projects” when the chance comes “to do something awesome with our partners and the Dota 2 community”.