Jabz is returning to Fnatic

Can Fnatic get back to their winning ways? 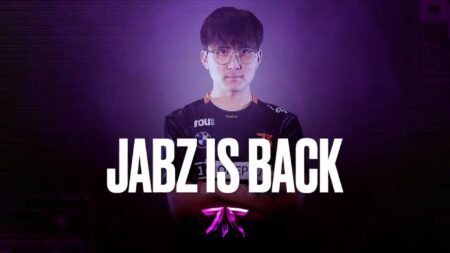 After having spent a month looking into a replacement for their open Dota 2 roster spot, Fnatic has surprisingly re-signed Anchua “Jabz” Jirawong — the same support player that they departed with in early September.

The organization even shared a hilarious welcome back video for Jabz on their social pages.

Jabz may have returned to Fnatic, but he will be playing his desired position 4 support role, while Djardel “DJ” Mampusti will move to the position 5 hard support role. DJ has subsequently been named as Fnatic’s team captain.

Fnatic has been through multiple roster changes recently. As mentioned earlier, they mutually parted ways with Jabz at the start of September. The organization then decided to bring in Nico “eyyou” Barcelon as his replacement. But, after Fnatic lost their veteran leader Daryl “iceiceice” Pei Xiang, who departed the organization on September 16 after choosing to renew his contract, Fnatic made another quick roster change by dropping eyyou from the team.

Fnatic’s Dota 2 roster was last seen struggling during the BTS Pro Series Southeast Asia Season 3, where they finished in last place with stand-in players Lee “Forev” Sang-don and Kenny “Xepher” Deo. The team has worked to find the same level of success they had at the start of the year, when they won five straight events in a row.