Let’s talk about the Elephant in the room. 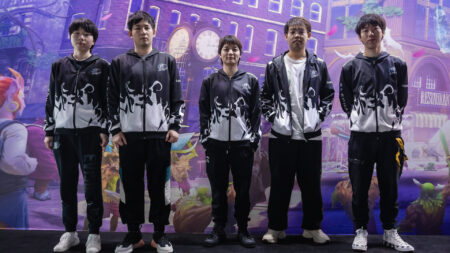 The China Regional Qualifiers for The International 10 starts today. 10 teams from China will be competing against each other to represent their region.

The Qualifier will feature teams from the Lower and Upper division of the China DPC. The most notable of these teams is undoubtedly Team Elephant.

Will Elephant be the 5th team to represent China?

China already has four teams that will be competing at The International, the most for any one region. One spot is still open for China and Elephant is aiming for that.

Established in October 2020, Elephant has some of the most notable names in Dota 2. After some roster shuffles, the current team is made up of:

However, Elephant hasn’t been able to find the level of success that was expected for a team of this pedigree. When the team came together, the players seemed like they abandoned their individual aggressive playstyle, and instead adopted a more conservative approach to win lanes.

As such, the team only accumulated 85 DPC points throughout the whole season.

Still, they’re a China Superstack with a flourishing resume

Fy, who plays position support for Elephant, has attended five Internationals in his nine-year career.

Fy is able to create a lot of space for his team and make clutch plays. He typically plays highly mobile supports who can roam around the map like Earth Spirit, Mirana, and Hoodwink.

His last two appearances at The International were with team PSG.LGD. Most notable for his plays on Rubick, Fy has gotten extremely close to holding the aegis multiple times, with two-second place finishes and one-third place finish at TI.

Yang has been with Elephant since the team’s inception. The team’s offlaner has attended several Internationals as well.

5th on the China MMR ladder, Yang provides a very stable laning stage for Elephant. Typically picking strong front-liners like Dragon Knight and Centaur, Yang is the shield for his team.

Will he be able to prove his mettle in the qualifiers?

Elephant initially contracted Liu “Sylar” Jiajun to be their carry. However, almost immediately, Eurus became the stand-in instead.

This eventually led to Eurus joining full-time as the carry player. The highest MMR player in China right now, he’s exhibiting an incredible amount of mechanical skill and farming ability.

Eurus originally played with Vici Gaming with his teammate Yang, and finished 5th in their last appearance together. The duo’s chemistry will surely be a big asset for the team.

Somnus is Fy’s teammate from PSG.LGD. He has also attended five Internationals in his career, and is famous for his ability to create space for his team on Shadow Fiend and the Spirit Brothers.

It would be an amazing story if these two partners will be able to finally hold the Aegis.

Super joined the team late in the DPC season as their position 5 on May 28th. Even though it takes time for players to jell together in Dota 2, this hasn’t been the case for a player as impressive as Super.

Super is new to the position 5 role but his leadership, combined with almost a decade of experience, is invaluable. While Super hasn’t attended an International since 2017, his previous five appearances at the tournament have been extremely impressive. He has been on the podium multiple times before, but the Aegis has eluded him.

With such a star-studded team, Elephant will surely impress at China’s Regional Qualifiers. Will they revert to a more aggressive style on their playmakers, or try to perfect their slow and steady laning approach to the game?

Elephant will go up against Royal Never Give Up on July 8. Catch the match live on BeyondTheSummit’s Twitch channel.