Dendi to play charity showmatch for Ukraine with Dota 2 talents

Who are these mystery guests? 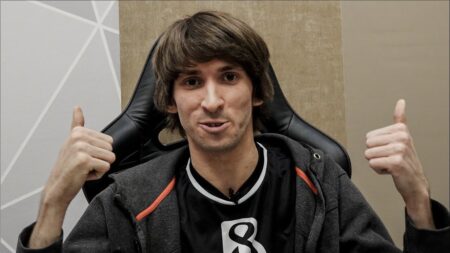 Ukrainian Dota 2 legend Danil “Dendi” Ishutin refuses to back down.

The 32-year-old will be playing in a charity showmatch with some of the best talents in Dota 2, including Jake “SirActionSlacks” Kanner, Andrew “Jenkins” Jenkins, Brian “BSJ” Canavan, and Austin “Cap” Walsh.

The event was announced by B8 Esports last night, with a creative trailer featuring snippets from the talents’ past broadcasts.

“We’re hosting a charity show match to support Ukraine with United24 fundraising platform,” the tweet wrote. United24 was launched by Volodymyr Zelenskyy, president of Ukraine, to collect donations in support of Ukraine.

Who else is playing the charity showmatch with Dendi?

In B8’s tweet, “other legends” are supposedly joining the game.

With Dendi’s ties to past professional players, it’s possible that we’ll get to see some members of the legendary Natus Vincere squads as well. The first-ever champions of The International reunited in 2019 to play in Midas Mode 2, organized by Moonduck, in which SirActionSlacks was also a key part of.

While there’s been no indication of what players will be getting into, it’s possible that a more off-beaten game mode like All Random Deathmatch or Ability Draft be chosen, instead of a standard All Pick game.

The game will be streamed on Dendi’s official Twitch channel here.