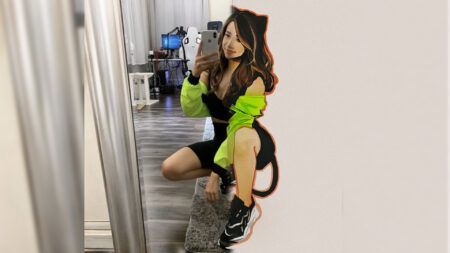 Vtuber is short for virtual YouTuber, a type of content creator that uses a two-dimensional or three-dimensional digital avatar in their videos.

These avatars are generated using computer graphics and are often controlled using motion capture (mocap) and other virtual reality devices. The term was first coined by Kizuna Ai, the world’s first Japanese vtuber.

The birth of virtual YouTubers

You may have heard of her, or even seen her a couple of times — Kizuna Ai is arguably Japan’s most recognized vtuber. She’s a bubbly and spontaneous girl easily identified by her brown hair, pink ribbon hairband, and white sailor uniform. And she’s not even real.

Here is one of her debut videos on YouTube, where she first used the term “virtual YouTuber” which was eventually shortened to vtuber.

Now to be clear, there is a person behind Kizuna, but they’ve never been seen. All we know of Kizuna is what we see on the channel. Actually, Kizuna (or simply Ai-chan) runs two accounts, with her main channel featuring videos that vary from music, online challenges, and even a virtual bar where you can just listen to Kizuna casually talking.

Her other account, A.I.Games, is a channel born out of a partnership between her and game development company Asobimo. A.I. Games contains Ai-chan’s Let’s Play videos with games such as Fall Guys, Minecraft, Grand Theft Auto V, and even the VR rhythm game Beat Saber.

Kizuna Ai’s impact became so big in Japan that she was even hired to become an ambassador for one of Japan National Tourism Organization’s (JNTO) travel campaigns.

With Kizuna Ai paving the way for vtubers, the new trend was immediately picked up by the locals.

Kizuna Ai’s steps were followed by more Japanese vtubers, all with their own musings and exotic personalities. Just like our regular human YouTubers, the video content from these vtubers varies from house tours (of their own virtual space), mukbangs, language lessons, ASMR, and of course playing games.

So how does vtubing work?

Vtubers aren’t actually AI creations. There’s a human behind their actions, controlling their avatars through motion capture, or some other means.

Most vtubers use motion capture or a mocap suit to detect the user’s facial and body movements. Here’s an example of how that works from Vtuber CodeMiko:

The person behind CodeMiko is a woman called Youna, and she recently revealed that her Xsens mocap suit cost her US$13,500. Here’s what happens to Miko whenever Youna takes off the suit:

The suit, together with the use of Unreal Engine Software, gives life to CodeMiko, a virtual Twitch streamer in an adorable pink twin bun hairstyle.

A more achievable, cheaper vtuber setup is used by the talents of Hololive, an agency that manages a group of virtual YouTubers.

“For streamers, we use some function that’s similar to Animoji on iPhone X so that the characters can move easily,” explained Motoaki “YAGOO” Tanigo, the CEO of COVER Corporation, Hololive’s parent company. YAGOO boasted that their vtuber talents are able to hold a 2D stream at the comfort of their own homes without the need to drop by a studio complete with a full virtual reality setup.

Three-dimensional characters are a bit more complicated and requires a full studio equipment.

“Once they reach 50,000 subscribers, we then offer them a 3D version of themselves and that’s when they start to come into the studio to do the streams,” said YAGOO. “After reaching 50,000 subs, we give them a 3D version similar to Kizuna Ai — it’s like a service from us to the talent.”

In Japan, vtubers hold different reasons to enter the virtual reality scene, but most of these streamers more often than not take the vtuber path because they do not have the same confidence that normal streamers have.

“It’s hard for girls to show their faces if they’re not good-looking,” said YAGOO. While they may be unfortunate in this situation, the vtuber business exists to provide these streamers a system to showcase their personality and at the same time offer an alternate version of themselves that they can be confident in on-screen.

For those who want to give vtubing a try, there are programs like VRoid Studio where users can create and customize their avatars for free. Once you got that sorted out, you can just grab your webcam and use FaceRig to track your facial expressions and inject them into your virtual avatar.

Vtubers you should be watching

There are about 10,000 vtubers recorded since 2020, all with their own unique characteristics and identities.

Here are some of our favorites:

Arguably the hottest vtuber right now is the cute shark head called Gawr Gura, who claims she is “a descendant of the Lost City of Atlantis, who swam to Earth.” Gura captured the hearts of many people because of her simple and easygoing live streams, cuteness aside. She just started July last year, but Gura already has 2 million YouTube subscribers, a feat that took Kizuna Ai two years to achieve.

Her streams usually consist of let’s plays from a variety of titles like Mario Kart, Minecraft, and even Red Dead Redemption. Wanna see a vtuber exercise and lose weight? Check out Gawr Gura’s Ring Fit streams!

What makes CodeMiko stand out from the rest is her interactivity feature, which allows viewers to alter almost anything in her virtual space, from her physical appearance to the elements in her background. For a certain number of bits, you can mute/unmute her!

The technician behind CodeMiko used to work in the Research and Development field for live animation, and all the knowledge and experiences that she gained in the industry she decided to use later on to make her vision come true of mixing live action aspects with streaming.

“I would honestly place myself as more of a concept vtuber,” said Youna in an interview with content creator Devin Nash. “I feel like with a lot of the vtubers, they have a character and it’s just like they’re chatting. But what I’m trying to do is more like a show to prove my concept.”

OfflineTV streamer and Twitch darling Imane “Pokimane” Anys also joined the vtuber hype last year. She debuted her vtuber model last September, saying that “it’s such a cool thing to do” when she does not feel like being on cam.

She commissioned freelance vtuber artists Teru and Ann to make a 3D model in her likeness, complete with comfy yoga pants and long-sleeved tops.

There’s something really cute about Pokimane and her fresh experience with vtubing, something that long-time Poki fans and the vtuber fandom might find weirdly appealing.

In his comeback YouTube videos, PewDiePie has been using different avatars which are all a part of his reverse face reveal plan. The usual vtuber would have their face (and any of their real-life information) hidden from their viewers, but PewDiePie has this idea of doing the opposite since everyone is already familiar with him.

A male anime protagonist and a Minecraft character — these are just some of the avatars that Pewds have already used in this reverse face reveal. What other surprises does he have in store for us?

If you’re looking for a really fun and mischievous vtuber, Pekora’s streams are right up your alley.

Just like Gawr Gura, Pekora is under the Hololive talent umbrella. She is this indigo-haired bunny girl who has carrots stuck in-between her braids. Despite her odd choice of hairstyle, Pekora’s streams reels in hundreds of thousands of viewers especially whenever she holds singing and just chatting streams.

Pekora also plays video games like Minecraft, PUBG, and Among Us with her co-Hololive vtubers.

The future of vtubers

Since vtubing is still a relatively new concept especially for countries outside of Japan, vtubing still has a ton of growth potential. The next big thing might even be group vtubing, especially since these virtual YouTubers have started holding collaborative streams, like playing Among Us. It’s like OTV and friends!

From Japan to the rest of the world, right now is undoubtedly the best time to become a vtuber. This year, we fully expect more content creators to jump on the trend and create their own avatars, all with unique personalities to stand out in the digital market.

Of course with vtubing already established, digital avatars will surely be on the rise and not just for streaming or marketing, but for other purposes as well. Remember how League of Legends’ champion Seraphine started out last year as a mysterious, rising indie musician? Riot Games magnificently built her story through her social media accounts and later on established that she will be having a collaboration with K/DA and will later on debut as League of Legends’ newest mage champion!

South Korean girl group aespa is also experimenting with digital members with the group featuring both human and virtual members.

One thing is for sure, Vtubing is here to stay and as technology gets more affordable and more advanced we see it becoming more and more mainstream. There could even come a day where everyone has a digital avatar and that just becomes your standard way of interacting with other people online.