Which one is the impostor? 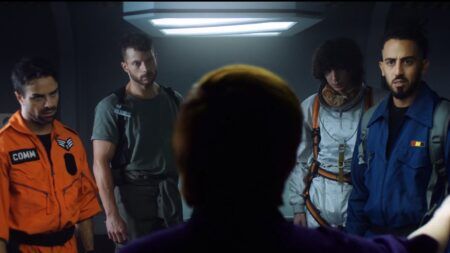 Online social deduction game Among Us continues to be one of the best ways to deceive your friends without consequence. With its growing popularity, many have created parodies, stories, and memes to show their love for the game.

YouTubers Jay & Arya created a short film based on the game that ups the ante in production and suspense of the game’s premise. The short film features some great acting from the seven crewmates and some heartstopping melodrama to keep you on your feet.

While the short movie doesn’t adopt the game’s cartoonish nature, the film still pays homage to the game very well with its own sci-fi thriller atmosphere.

The production design and dialogue are well-detailed and take various references from the game itself. The first scene shows a crewmate running through the dark and trying to open a door with a card, but of course, he’s scanning it a bit too fast before he meets his demise.

The actors also call each other by their colors and even say “sus” when new evidence is discovered. Even during their meetings in the cafeteria, Orange gives some lore about a virus that came from Polus, another map in the game, that created the impostors.

Though Among Us can be seen as a simple yet charming game, this well-made short film definitely shows its potential to go into other forms of media.