They might not always know what we’re talking about when we mention frags or KDA, but moms are often the best cheerleaders in the world when it comes to their kids. This Mother’s Day, we celebrate the strong women supporting their esports pro player kids.

Some of these esports moms have openly shown their support for their pro player kids: A mom coaching their son in Tekken 7, a mom who’s a diehard FNATIC fan, and even a mom who can name all the League of Legends champions.

Here are 5 awesome esports moms who understand and support the esports dream:

Former League of Legends pro and now fulltime streamer Joedat “Voyboy” Esfahani is pretty lucky to have a mom who knows Vayne from Jax.

Voyboy posted a series of text messages from his mom who watched him play at a Wild Rift tournament.

“GGs, amazing Vayne game,” his mom sent, and then cheered for his Tryndamere, Jax, and Diana as well.

The fact that his mom says GG? Pretty cool, mom!

OG might not have won back-to-back Dota 2 The International titles if Ana’s mom didn’t believe in him.

At a time when the term “esports” still elicited raised eyebrows from parents, Ana’s mom saw potential thanks to some convincing from his older brother.

“When he went to Shanghai… that’s my hometown,” his mom said in Ana’s player profile. “That’s why I decided to send him to China, to see if he has this talent.”

We’re glad Ana’s mom took a leap of faith for her son!

3. Boaster’s mom has her own Twitter to support FNATIC

It’s one of the most wholesome Twitter accounts! @Boaster_Mum stays up to date on the latest news on her Valorant pro son, Jake “Boaster” Howlett, his team Fnatic, and his VCT panel host girlfriend Yinsu Collins through her own Twitter account.

Boaster’s mom publicly retweets all news about VCT EU and Fnatic, flaunts her Fnatic merch, and even psyches her son up about his upcoming matches.

2. Vermilion’s mom coaches him on Tekken

Tekken 7 pro Raphael “Vermilion” Cueva shared these awesome messages from his biggest fan. Most moms might not be familiar with the games their kids play, but Vermilion’s mom levels it up by coaching him on his hellsweeps, tsunami kicks, and sidesteps.

“Be less predictable to them,” his mom coached him. “Bluff if you have to, and set them up by planning your moves in advance.” 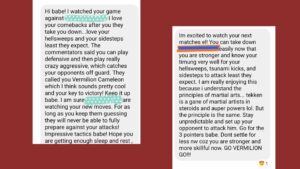 1. TenZ’s mom just wants him to finish his food

Long before joining Sentinels and long before Valorant, TenZ was eating noodles while streaming CS:GO when his mom stepped into the room.

She did not sound happy at all as she yelled for him to finish his food, while he casually scored a double kill.

Nonetheless, TenZ’s mom is still his biggest supporter, and was so excited for him to head to Iceland.

Even the legends of esports have only one true shotcaller in their lives.

Bonus: When your mom, Kaisaya, is an actual esports mom

A shoutcaster, analyst, and a former Arena of Valor pro player for Liyab Esports, Em “Kaisaya” Dangla is an actual esports mom.

This mom is also the go-to caster, analyst, and stats-woman for any mobile MOBA in Southeast Asia, from Mobile Legends: Bang Bang, Marvel Super War, Arena of Valor, and now League of Legends: Wild Rift.

She’s also a manager and coach for several Wild Rift teams. All this while being a loving mom to her son, Shanrei.