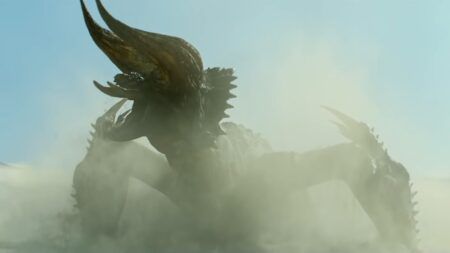 However, a new trailer released today actually looks quite promising.

While many MH fans were livid about the teasers showing actress Milla Jovovich and her posse in military gear, the trailer provides some context on how the military gets reeled into the world of Monster Hunter.

During a mission, Jovovich’s team happen to drive into a portal into another dimension in which they find the monsters. With bullets not being too effective against the gigantic wyverns, Jovovich meets an actual monster hunter portrayed by renowned Thai martial artist and actor Tony Jaa.

With Jaa now in the plot, he provides Jovovich’s troop with the necessary trademark weapons like the dual blades, the great sword, and the bow to confront the monsters and provide diehard fans with action that’s akin to the game.

On top of the more favored weapons in hand, the protagonists are looking to face two known monsters from the franchise: Diablos and Rathalos.

While the trailer shows them facing the burrowing, big-horn Diablos upon their arrival in the primal realm, we don’t know if Jovovich’s rocket launcher took it out completely.

As for the fire-breathing, flying wyvern, we’re told that Jaa’s family was a victim of Rathalos and he’s still looking to exact his revenge on the treacherous creature.

Monster Hunter will premiere in theaters this December.