The popular streamer expressed frustration at the game after facing bugs and server issues. 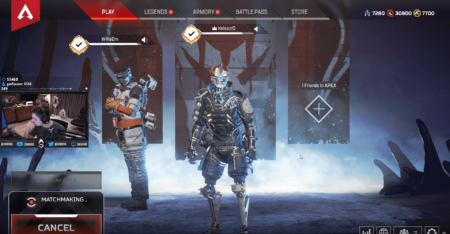 Former CS:Go pro and streamer Michael “shroud” Grzesiek isn’t happy with the state of Apex Legends after returning from a brief hiatus.

The streamer added that he has “about three games left” before he quits the battle royale game “forever”.

Shroud had taken a break from streaming after a scooter accident that required surgery on his left elbow. Since then, he’s been playing Escape from Tarkov, as well as PlayerUnknown’s Battlegrounds (PUBG), though he returned to playing Apex Legends on April 15 after his followers requested more content.

During his first stream after the hiatus, shroud said to his viewers he’d “rather play PUBG, and that’s saying something. PUBG’s in a really good state right now, actually”. Moments later, Shroud got warped into a slow-mo server plagued by a latency bug for his next game.

Shroud was one of the biggest streamers of Apex Legends, and during the game’s initial release, his streams were the most watched across different platforms. Apex Legends has been facing a 75% decline in peak viewership, and Respawn, the developer behind it, has responded by trying to fix issues such as hacking, crashes, and spamming during character select.

In the two months after the February launch, content in Apex Legends has mostly remained the same, with only the introduction of one new weapon, the Havoc Energy Rifle, one new character, Octane, and a somewhat unimaginative battlepass. Dataminers, however, have found hope in game files that seemed to indicate at least five new weapons inspired by or with reference to Titanfall that could be coming.

With more bugs and exploits getting discovered each day, it remains to be seen whether Apex Legends will weather this storm with relevant updates and prove that it deserves the attention it’s been getting from the esports industry.