The JoJo Stone Ocean anime is coming back this fall season, but things are getting more complicated for Jolyne Cujoh and her rag-tag crew in Green Dolphin Street Prison.

Warner Bros. Japan revealed a new trailer of JoJo’s Bizzare Adventure Stone Ocean Part 2 during Anime Expo in Los Angeles, and here’s what we can look forward to.

We last saw Jolyne holding out in the prison courtyard to deliver the Stand disc of father Jotaro Kujo to the Speedwagon Foundation. While an enemy Stand named Whitesnake scoured the frog-infested courtyard for the disc, she was able to secretly tie it to the SPW messenger pigeon, Savage Garden.

Jolyne has yet to meet Whitesnake’s owner, chaplain Enrico Pucci. Pucci wants to use Jotaro’s memory disc to find out how to reach heaven from Dio’s journal, which Jotaro burnt. 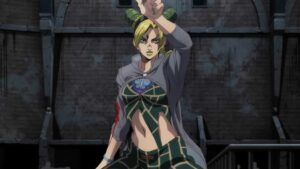 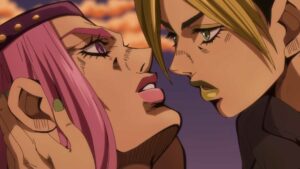 Part 2 of the JoJo Stone Ocean anime will consist of the last 12 episodes of the first season.

In the post-credit scenes of episode 12, Enrico Pucci and fresh face Sports Maxx plan on using a bone from Dio Brando’s body to find a way to reach heaven. Looking at the recent trailer, Part 2 will be a race between Pucci and Jolyne on who will first secure the bone.

As Pucci gets some help from Maxx and other evil Stand users, Jolyne is flying solo in the meantime. JoJo will be intentionally entering solitary confinement to track down the bone.

Aside from Foo Fighters and Ermes Costello, a new pink-haired Stand user named Narciso Anasui joins the side of JoJo, and it looks like that he’s got the hots for Jolyne, vowing to protect and marry her.

While Pucci has been working from the shadows via his henchmen and Whitesnake, the trailer hints at an inevitable fight between Jolyne and the chaplain. With Stone Ocean being exceptional in close-ranged combat, we can’t wait to see her land some killer blows on the enemy Stand.

Here’s the official VA cast of Part 2 of the JoJo Stone Ocean anime:

Part 2 of the JoJo Stone Ocean anime will air on Netflix on September 1.