Who has the highest bounty in the One Piece universe?

These heads will fetch a fortune in Grand Line. 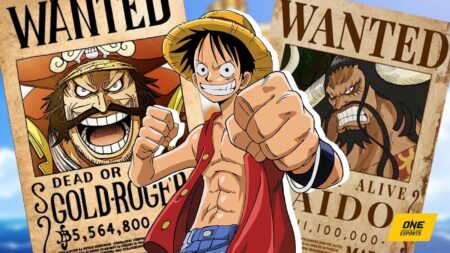 One of the longest-running anime series in the world, One Piece continues to inspire millions of viewers with characters like Monkey D. Luffy, who never loses sight of his dream to become the Pirate King.

And now that Eiichiro Oda’s manga has successfully transitioned to the Wano Country Arc, the mangaka (manga artist) revealed the One Piece bounties of different characters in the franchise.

In One Piece, a character’s bounty is an indication of how dangerous they are to the Marines and World Government. In some cases, for various reasons, the bounty does not necessarily reflect the strength of a character like Sabo or Chopper.

Bounties are displayed in Belly (beri in Japanese) currency, which has a symbol similar to the Thai Baht (฿).

Throughout the series, the value of One Piece character bounties is constantly changing. However, two characters continue to top the list in terms of notoriety, and no one has surpassed the bounty of Pirate King, Gol D. Roger, and Whitebeard, Edward Newgate.

The complete list of the highest One Piece bounties

Trafalgar Law is the captain and doctor of the Heart Pirates, and avid One Piece viewers admire him for his intelligence and cool demeanor. His bounty increased from ฿200,000,000 to ฿440,000,000 after the two-year time jump in the series. After his Seven Warlords of the Sea membership got revoked, his bounty was raised to ฿500,000,000.

Fast-forward to the Wano Country Arc, and Law’s bounty swelled to ฿3,000,000,000 after defeating the Four Emperors’ Big Mom, together with the help of Eustass Kid.

Can he surpass the Pirate King’s bounty soon?

Monkey D. Luffy, Eustass Kid, and Trafalgar D. Water Law all share the same bounty after the Wano Country Arc. The trio is now on equal footing when it comes to their threat level according to the World Government.

The most surprising name in this list is Buggy the Clown, one of the four emperors. Buggy has taken fans from one surprise to another with his affiliations throughout the series, going from a man who only knew how to brag in East Blue to becoming the “best friend” of Red-Haired Shanks.

And who would have thought he was also a member of the Shichibukai, the seven warlords of the sea?

More recently, Buggy was appointed as one of the Four Emperors, leading the group against the Marines. From a bounty of ฿2,000,000 two years ago, his bounty has now been increased to ฿3,189,000,000.

Dracule Mihawk, also known as Hawk Eyes, is One Piece’s strongest swordsman, as well as the teacher of Roronoa Zoro.

Mihawk can be very dangerous, especially since he possesses Yoru, one of the 12 Supreme Grade swords. The cruciform-like weapon is one of the strongest and most well-crafted swords in the One Piece world — in Mihawk’s hands, it is capable of cleaving massive structures, including a towering mountain of ice.

Additionally, Mihawk is also a user of Advanced Conqueror’s Haki, a technique that grants users a sixth sense.

Marshall D. Teach, also known as Blackbeard, is the captain of Blackbeard Pirates. He is one of the few characters with a D. in his family name. But unlike Monkey D. Luffy, Monkey D. Garp, or Gol D. Roger, Blackbeard is a cruel and scheming person.

He possesses the powers of the Shadow-Shadow Fruit (Kage Kage no Mi), which gives the user the ability to control the shadows of living creatures, and the Tremor-Tremor Fruit (Gura Gura no Mi), which allows the user to create vibrations. He is the only one who can possess the power of two devil fruits, out of all the One Piece characters.

Strong, arrogant, and devoid of morality, Blackbeard is one of the most hated characters in One Piece.

Red-Haired Shanks is probably the most mysterious character in One Piece, especially since he can just sit down and talk to the Five Elders, the heads of the World Government that hold the highest authority in the series. Even after 1,000 manga chapters, the Emperor of the sea’s identity comes with big question marks. One thing that fans can’t deny is his insane power, which makes the pirates of all four seas afraid and wary.

Big Mom leads a powerful and large pirate army called the Charlotte family, which consists of 85 children. The husbands of the daughters are also considered part of the family.

“People often say ‘If it’s one-on-one, Kaido will win.’ On land, sea, and air… among all living things, he is a pirate who is known as the ‘strongest creature’!!!”

Kaido is one of the Four Emperors who ruled the seas for many years. He is the Governor-General of the Beasts Pirates, as well as one of the few people capable of stopping Blackbeard.

Dubbed “The World’s Strongest Man,” Whitebeard is the former captain of Whitebeard Pirates and is also known as “The Man Closest to One Piece” after the death of Gol D. Roger. Whitebeard was also a member of the Yonko until his death in the Marineford Arc.

Whitebeard was one of the greatest pirates of the previous generation, and his death ushered in a new era for rookie pirates.

Gol D. Roger was a legendary pirate. As the captain of the Roger Pirates, he holds the title of Pirate King and possesses the legendary treasure called One Piece. He was also the first person to find the last island of Laugh Tale, where the One Piece treasure is located.

Currently, the Pirate King has a bounty of ฿5,564,800,000. However, his wanted notice expired after he was willingly executed due to an incurable disease. Because of this, young pirates might surpass Gol D. Roger’s bounty in the near future.

Here is the complete and updated list of the highest One Piece bounties:

READ MORE: One Piece Film Red takes over New York Times Square ahead of US premiere