They defeated both Liquid and G2 en route to the title. 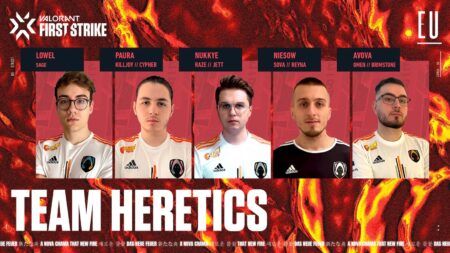 Team Heretics, nicknamed the “Titanslayers” for defeating both Team Liquid and G2, are the champions of First Strike EU after defeating SUMN FC 3-1 in the grand finals.

The best-of-5 series was unique for the Valorant EU scene as for both teams, this was their first major tournament experience.

Heretics came out in top form on the first map, even as SUMN FC mixed up their expected lineup with Doma on Jett and Mistic on Omen. However, SUMN FC’s unfamiliarity with Ascent showed as Heretics took almost every round, winning with a 13-1 score.

A highly anticipated Icebox brought out Sages and Vipers on both teams. SUMN FC were in better shape on their map pick, showing more preparedness with the various angles Icebox offers, and finished the map with a 13-7 in their favor.

Haven saw Heretics back on top form, with better execution and retakes. SUMN struggled with sustaining their post-plant game, with Heretics eventually taking 13 rounds to SUMN’s 5.

Matters came to a head on Bind, a map where SUMN FC made their Viper composition famous. Heretics secured an early lead with a 7-2 score, but by Round 15, SUMN FC began making their presence felt. SUMN’s momentum continued until the score tied to 11-11, until Heretics pulled through with the final two maps to take the series.

Heretic’s in-game leader and series MVP Christian “loWel” Garcia Antora said he was “super proud of his team” in the post-game interview, especially since they did not have any major tournament experience prior to First Strike EU.

SUMN FC was quick to defer to Heretics on their social media, keeping the humor and praising the team for their skill.