Nitr0 and Hiko will be the centerpieces of 100 Thieves’ Valorant roster rebuild. 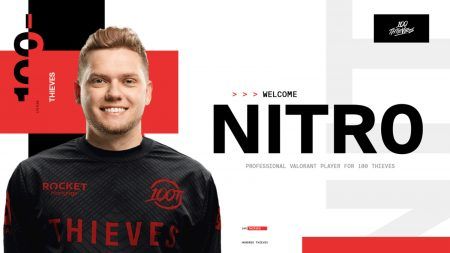 nitr0 is best known for his time as the in-game leader of Team Liquid’s CS:GO squad, which he was a part of from early 2015 to August this year. Under his leadership, Liquid became the top-ranked CS:GO team in 2019, when they won eight tournaments, including the IEM Grand Slam which rewarded a grand prize of US$1 million.

Aside from being a great in-game leader, nitr0 is also renowned for being an excellent all-around player that can take on various roles, adapting based on his team’s needs.

“Excited is an understatement! I am so happy for this opportunity. Let’s make the best of it now,” nitr0 posted on his personal Twitter account.

With this signing, 100 Thieves is looking to rebuild its Valorant roster around nitr0 and fellow former CS:GO legend Spencer “Hiko” Martin. The two notably played together in Team Liquid back in 2016, during which they earned a runner-up finish at the ESL One: Cologne 2016 Major.

Expectations were high for 100 Thieves after it signed Hiko in early June and surrounded him with the former PUBG pros. However, the squad failed to develop any chemistry together and bottomed out in three of the four tournaments they played in.

One of the apparent reasons why the initial 100 Thieves Valorant roster was a bust is that Hiko was not allowed to have a say on who will join him on the team, despite being team captain.

“100 Thieves made the decision,” Hiko revealed in one of his streams. “I know they said I was going to be the team captain, but [they] made the call.”

But now with two former CS:GO heavyweights headlining its Valorant roster, 100 Thieves is expected to have wised up and given nitr0 and Hiko the freedom to build the team they want.

READ MORE: Killjoy is broken but here’s how Riot can fix her