The Oni skin pack will make you say, “Sugoi!” 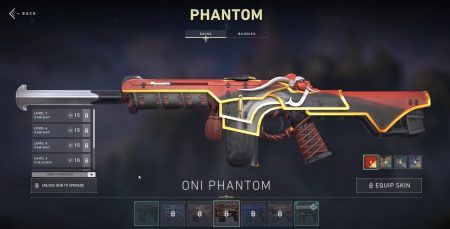 If you’re a highly-cultured person of taste, you’re probably a Phantom-enthusiastic and can appreciate its faster rate of fire, lower recoil, and built-in silencer.

While the Phantom itself is great, it’s been overshadowed in the cosmetics department by its knuckle-dragging cousin, the Vandal, which boasts at least three (Prime, Dot Exe, and Elderflame) high-quality skins.

The Vandal’s monopoly on good-looking assault rifles is about to end however, as the upcoming Oni skin pack includes a Phantom that is probably the nicest-looking weapon skin to date.

While Riot hasn’t officially announced the pack yet, the full set, including color variants, and reload and kill animations can already be seen in-game.

The set will include the Shorty shotgun, Bucky shotgun, Guardian rifle, Phantom Rifle, and a Katar dagger (a.k.a a fist dagger).

Like the Prime, Sovereign, and Elderflame packs, the guns can be upgraded with Radiant points to unlock a unique kill animation that will play if you get the last kill in the round. For the Oni pack, three ghostly katanas will appear to chain your victim’s spirits to the physical world.

As the guns appear to be in the same tier as the Prime and Sovereign packs, expect the complete pack to cost around 7,100 VP ($70).

The pack is expected to hit the store after the current Elderflame pack cycles out of the featured slot on July 24.