You’ll never see this many gods in one match again. 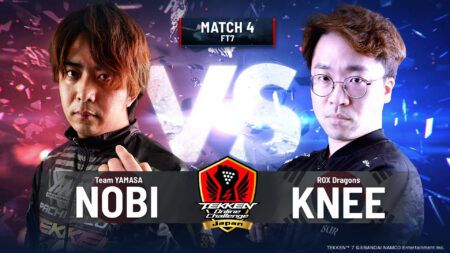 Tekken Online Challenge Japan showcased some of the country’s best Tekken gods in an exhibition series last weekend, but instead of having the usual countryman vs. countryman set-up, Japan invited over the Tekken gods of Korea to re-ignite its longtime rivalry.

The exhibition series featured five matches that pitted the best of each country against one another:

With such a stacked line-up, let’s check out the five best plays from the Korea vs Japan exhibition series.

5. Ao answers the Rage Drive with another Rage Drive

Ao and Chanel’s battle turned into an interesting mirror-match with both players knowing how to play Tekken’s newest character, Kunimitsu. With no luck on Eliza or Zafina, Chanel switched to the fox ninja to give Ao a taste of his own medicine.

Unfortunately, Ao served it right back to Chanel with some incredible whiff punishes. As the more experienced Kuni player, Ao instantly read through Chanel’s poking strategies and dominated the match-up. In one instance, Ao instantly dodged a point-blank Rage Drive and punished it with his own, slashing through Chanel for his sixth game win.

While Double may be known as Marshall Law specialist, LowHigh knew his way around the character since he used to be his main in the previous Tekken entries.

Knowing a few of Law’s most dangerous moves, the UYU player was able to duck under a final kick and deliver a round-ending wall combo. Entering the next round, LowHigh easily read Double’s slide and transitioned the punish to a wall-carry. From there, the Steve player went to town with an endless flurry of punches that closed out his fifth game.

As the battle of the Tekken World Tour champions, Chikurin (2019) and Rangchu (2018) were neck and neck in the first-to-seven match. Rangchu still stuck to his beloved main of Panda while Chikurin brought out the Wing Chun stylings of Leroy Smith.

Chikurin eventually came out as the winner with an astonishing final round. The THY player duped Rangchu into ducking after two low kicks and pulled out his exclusive cane Rage Drive to complete the no-round brown.

2. Ulsan unleashes his tigers on Gen

The final match featured the youngbloods of each scene, Japan’s 19-year-old Gen and Korea’s 20-year-old Ulsan. While Gen was the ultimate victor in the first-to-seven series, Ulsan still showed his skills on his longtime main of Kazumi.

In the fourth game, Ulsan was on point with his whiff punishes. Once Gen punched out-of-range, he immediately went into Kazumi’s Tiger Wind Uppercut and sent him flying to the wall. After a successful hellsweep, Ulsan ducked right under Gen’s grapple attempt and launched him with another tiger uppercut, finishing him off with a simple karate chop that miraculously clipped Fahkumram’s back.

Tekken veterans Nobi and Knee pulled out some interesting pocket picks on each other. Nobi played around Lars, Dragunov, and even Steve while Knee started off with Marduk and transitioned to Negan near the end.

Even though Nobi was finding some luck with the recently buffed Lars, Knee’s bat-wielding Negan turned up the competition with a home-run combo. The RoX Dragons player got a hit-confirm combo that ushered in a wall-splat screw, a Rage Drive wall re-splat, and a killing ground-break combo.