The Japanese prodigy returns to form with Fahkumram. 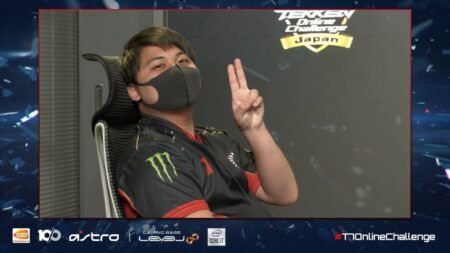 The Tekken Online Challenge online circuit returned to its home country of Japan last weekend to showcase the best fighters in its local scene.

While many known players like EQNX’s Masa and Team Yamasa’s Yuu came out to play, the open tournament’s grand final was a brutal battle between teenage prodigy Genki “Gen” Kumisaka and local favorite Hakaioh.

Despite the final showdown being a rematch to a close winner’s final, Gen came out as the undefeated champion with a sweeping 3-0 scoreline.

Game one was an easy win for Gen. Still using his new character of Fahkumram, the Team Liquid player utilized his long counter-hit kicks to counter the King specialist. With his opponent running low on health, Gen repeated his mid poke to claim the first game.

Hakaioh was still showing off King’s wrestling flair with follow-up grapples and the unblockable Moonsault Body Press. Unfortunately, Gen took over with another counter-hit wall splat that led to a killing Rage Art.

Hakaioh finally showed signs of life with a nail-biting round that he almost lost control of. While he started the round with a solid wall-carry combo, Gen immediately recovered with a grapple cancel and went for two sweeping Ramasuras. Luckily enough, Hakaioh managed to claim the round with a quick floating jab that stopped Gen’s flying-knee kick from registering.

Hakaioh continued his success into the round with a beautiful hit-confirm Lay-off. Even though Gen was able to poke himself out of the health deficit, the King specialist landed a Double Hook Disaster that converted into a round-ending Rage Art.

Despite Hakaioh’s success, Gen pushed his Fahkumram into overdrive with better counter-hit set-ups and mix-ups. The Team Liquid player got a perfect round with an incredible guaranteed wall-splat and won the entire tournament with a simple punish accompanied by a flurry of strings.

Along with the online format, Gen had the chance to double his earnings with a Final Boss battle that featured a triple threat of Yuta “Chikurin” Take, Daichi “Nobi” Nakayama, and Shoji “Double” Takakubo.

When it came to the final final boss of Double, Gen ran into some problems. With Double specializing in Law who is a run-down character, the Fahkumram player’s mid-pokes were instantly punished by a flurry of jabs. Double won the first game with an easy low-parry that converted to a deadly flying kick.

Even though Gen was able to tie up the scoreboard at 1-1, Double came back with an insane side-step punish that concluded the final series with a no-round brown.

The Tekken Online Challenge circuit will showcase the Philippines on December 12-13 as its last stop of the year.