Riot Games will debut a new champion rotation in the second set of Teamfight Tactics. The newest addition to the bunch is a duo of fairly toxic champions, Twitch and Singed.

The news about the upcoming champions came through a reveal video by German YouTuber Maxim Markow. In the video, he reveals that Singed will arrive as a Poison Alchemist while Twitch will be a Poison Ranger. 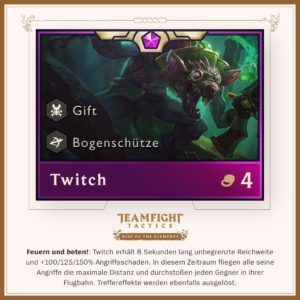 Alchemist units will have the ability to move without stopping in battle, avoiding unit collision with both friendly and opposing units. As for poison champions, they apply a neurotoxin that increases a unit’s mana cost by 50% at three units.

Singed unleashes his truest nature as Poison Alchemist. Sticking to his AoE playstyle in League of Legends, the legendary unit’s skill is a poison trail, dealing damage over four seconds.

The Plague Rat is a menace from the backline. Costing four gold, Twitch’s skill, Pray and Spray!, will give him an unlimited range and damage bonus for eight seconds. If that wasn’t deadly enough, his arrows will also pierce through units and apply on-hit effects.

For those eager to play Singed and Twitch, Set Two of Teamfight Tactics will arrive around early November.