The Chinese player committed to a 3-star poison predator build. 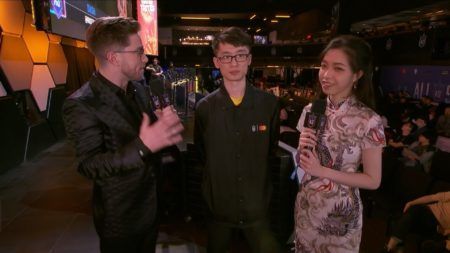 This year’s League of Legends All-Star Event heavily featured Riot’s new auto battler mode, Teamfight Tactics. TFT contestants were split into pairs of Legends and Littles — with Legends being top-tier personalities who competed and coached the Littles, players who were still ranked below the Challenger tier in TFT.

Chinese gaming personality Kongmen pulled away with the top prize at the TFT Legends Finals. Although he wasn’t on top during the whole game, he moved up to 1st place after winning a clash against Honglian.

The final stretch came down to Kongmen and Jinsol. Even though Kongmen was running a solid poison-predator composition, Jinsol’s broad bronze comp was able to win another clash due to a well-placed Nami wave and Soraka silence.

Despite Jinsol’s miraculous clash win, Kongmen immediately came back with the next round. Kongmen’s kill-confirm Kog-maw was able to eliminate most of Jinsol’s team with his Mundo taking all of the damage. By the end, Kongmen won the TFT Legends final with only 26HP left.

READ ALSO: Bwipo gets a triple-win in the 2019 League of Legends All-Star Event