The 2018 Capcom Cup champ will have a shot at another title. 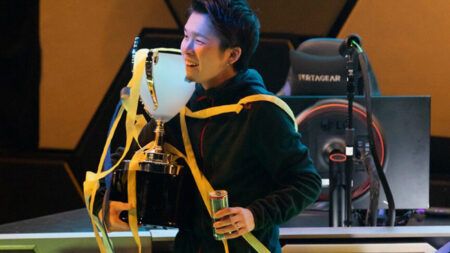 The qualifier provided the last chance for the best Street Fighter V: Champion Edition players from the strongest region to make it to Capcom Cup 2020. This was due to the fact that the tournament had allotted only two, highly coveted slots for Taiwan, Hong Kong, Japan, and South Korea, with the first already filled by Daigo “The Beast” Umehara through the East Asia 1 qualifier.

Gachikun, however, proved that he was up for the momentous challenge, still playing at the same level as when he won the Capcom Cup championship in 2018.

Gachikun defeated former Evo champions Keita “Fuudo” Ai and Hajime “Tokido” Taniguchi and made it all the way to the winners’ side of the grand final.

In the final match of the tournament, Gachikun faced yet another former Evo champion in Yusuke “Momochi” Momochi, who had made an incredible lower bracket run by eliminating Motoki “Otani” Otani, Tokido, and — quite possibly the best Dhalsim player in the world — ITK.

However, at the start of the final match, Momochi took a commanding 2-0 lead by landing long range normal attacks with Seth, which also prevented Gachikun to get any type of offense going with his Rashid.

But as the match progressed, Gachikun slowly found out what works well against Momochi’s Seth by pushing him into the corner and baiting the same long-range normal attacks with dashes and frame traps. Gachikun even pulled off an insane comeback win with no health left on his Rashid.

Momochi was able to reset the bracket by landing clutch anti-airs that left Gachikun grounded. He then continued to chip away on Gachikun’s health bar by throwing out special attacks, and finished the first set with a low medium kick.

After the reset, Gachikun doubled down on his offensive approach by throwing out more dashes and jump-ins that often forced Momochi to throw a wake-up ex-DP just to force the match back into a neutral state. But due to Gachikun’s offensive pressure, Momochi was forced to walk back to the corner where he continued to struggle.

The final game of the tournament ultimately came down to ‘who can trap their opponent to the corner,’ which was Gachikun’s specialty. And just like in the previous games after the reset, Momochi was forced to throw out wake-up ex-DPs just to stop Gachikun’s offensive pressure. And after a hit-confirm into a Critical Art finish, Gachikun confirmed his spot for the upcoming Capcom Cup 2020 tournament.

Gachikun has been on a roll in the last two tournaments he’s entered. First, he finished as the runner-up in the Japanese Esports Grand Prix, losing to Fuudo in the grand final. And in the CPT East Asia 2 tournament, he got his revenge by defeating Fuudo in the upper bracket quarterfinal with a 2-1 match score.

As previously mentioned, Gachikun will join legendary Street Fighter player Daigo as the only two representatives from Japan. The only way another Japanese player can get into Capcom Cup 2020, is if they win the fan-favorite vote by the community.

With the conclusion of the CPT East Asia 2 online qualifier, we now know the 15 players who have qualified for Capcom Cup 2020 — including the Capcom Cup 2019 champion Derek “iDom” Ruffin. Only three CPT online qualifiers remain for China, Oceania, and North America, and they’re all scheduled to take place this November.

READ MORE: Bonchan: ‘Half of last year’s top eight wouldn’t be able to keep their positions this year’