They almost didn’t make it. 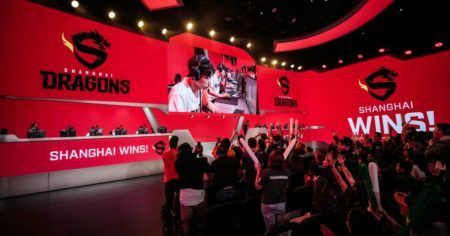 When the Shanghai Dragons finished the inaugural season of the Overwatch League with a winless 0-40 record — one of the worst ever in all of professional sports — there was nowhere to go but up.

Fortunately, things quickly turned around with the Dragons winning their first ever game in February against the Boston Uprising. Since then, they’ve continued to improve, and this past weekend the Dragons clinched their first stage playoffs appearance with a final Stage 2 record of 4-3.

The Dragons secured their spot by winning a crucial match against the Washington Justice, and while Los Angeles Valiant helped them out by defeating the Chengdu Hunters, dropping the Hunters to 3-4 for the stage.

Originally, the Dragons only had a slim chance of making the playoffs with less than a week remaining in Stage 2. The team had two big matches left, first against the free-falling Justice and then against the seemingly-invulnerable San Francisco Shock. Moreover, they had to rely on other teams punching their playoff ticket for them, due to potential 4-3 tiebreakers between them and the Hunters, Hangzhou Spark, Seoul Dynasty, and Philadelphia Fusion.

While the Dragons were clearly favored against the Justice, there was always the possibility of a slip-up — the ghost of that 0-40 season haunting them and keeping them from what was once a mere pipe dream. But they took care of business, winning the match 3-1 to keep their playoff hopes alive.

With the Dragons doing their part, it was the Valiant defeating the slipping Hunters that ultimately guaranteed Shanghai its first-ever playoff berth.

One of the keys to this improbable playoff run was the Dragons’ choice to run a DPS-centric composition while the rest of the league continues to use the tank/support GOATs meta. Ever since Season 2 kicked off, Shanghai’s duo of Jin-Hyeok “​Dding​” Yang and Min-Sung “Diem” Bae has showcased their potential to be the best DPS pairing in the league.

Diem ranks second in the league in final blows per 10 minutes, with 7.73, and fifth in eliminations, with 21.02, all while continuing to be elite on McCree and Widowmaker. Meanwhile, Dding has widely become recognized as the best Pharah player in the league and is excellent on Sombra as well, averaging 19.75 eliminations and ranking 16th overall in the league. Should the meta shift towards more DPS-centric play, Dding and Diem could become a winning core for the Dragons.

A playoff berth will likely do wonders for the team in terms of experience on the big stage, but for now, they are still far from realizing their full potential, as exemplified by their last regular season game against the Shock.

The Dragons showed that their trigger-happy ways can let them slug it out with the best teams in the league, but it wasn’t enough to stop the Shock from sweeping them 4-0 and making league history by finishing with a perfect 28-0-0 record in Stage 2.

The two teams will face off again in the quarterfinals of the Stage 2 Playoffs on May 10. History shows that the Dragons don’t have much hope of making it to the second round, but reaching the playoffs is still a noteworthy accomplishment by itself.