The Shock end their historic season with one of the most dominating playoff performances of any team in any sport. 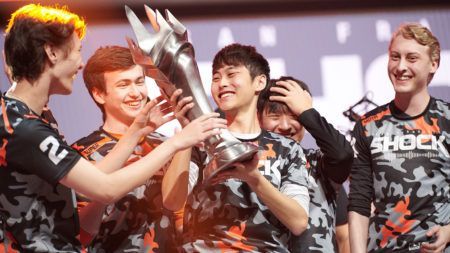 The San Francisco Shock completed an incredible season — which included the first-ever perfect stage — with a dominant Grand Finals performance that saw them absolutely steamroll the Vancouver Titans.

The Shock had won 16 consecutive maps going into the Grand Finals, with their last loss coming in round one against Atlanta, when they committed one of the worst C9s in OWL history.

The Shock were determined not to repeat that mistake, cutting a bloody path through the losers bracket, with 4-0 sweeps over last year’s champions, the London Spitfire, as well as the LA Gladiators, Hangzhou Spark, and New York Excelsior.

The Vancouver Titans had a much tougher time reaching the Grand Finals, with close 4-2 games against the Seoul Dynasty and LA Gladiators and Seoul Dynasty in the quarterfinals and semifinals, and a nailbiting 4-3 victory over the New York Excelsior in the winners finals.

San Francisco easily took round one, taking control early with a big Meteor Strike — Halt combo, and building up to a 93% lead before Vancouver was able to flip the point. However, San Francisco flipped it right back to take the first round.

Vancouver got off to a better start on round two, taking control first after some beautiful Doomfist play from Haksal.

Shock steamrolled through their attack phase, and didn’t lose a single team fight, ending their run with an incredible 2:49 left on the clock.

Against all the odds, Vancouver put in a nearly flawless attack run of their own, using a Reaper/Mei comp and finishing with 2:47 left on the clock.

The Titan’s second push wasn’t as successful however, and they were unable to take more than one tick on the first point, thanks in large part to Rascal switching to Pharah with only Jooseok “Twilight” Lee’s Ana able to counter her.

Despite this, Vancouver looked poised to win thanks to their strong defense on San Francisco’s attack. However, San Francisco managed to break through in overtime, thanks to a big Gravitic Flux from Hyo-bin “ChoiHyoBin” Choi’s Sigma that took out Twilight, and cleanup from Rascal’s Pharah that led to a team wipe.

For map three, the Shock went back to their starting DPS duo of Sinatraa and Nam-joo “Striker” Kwon.

The Titans started on attack first, and got off to a great start, taking both points with 1:34 left on the clock thanks to more strong play from Haksal and Hyeon-Woo “JJANU” Choi’s Sigma.

The Shock struggled at first on their attack, and only barely managed to cap point A in overtime. However, they managed to rush B before the Titans were able to set up properly, and took it on their first attempt, ending the round with 2:12 left on the clock.

Vancouver managed to take point A on their second attack, but didn’t have enough time left to cap B, and were unable to get even a single tick.

On their second attack, San Francisco took A fairly easily, and with more than a minute left on the clock, took B thanks to huge plays from Sinatraa’s Doomfist and Striker’s Reaper.

The Shock continued their pattern of rotating DPS, and brought back Rascal and Architect for the fourth map. The pair went with their Mei/Bastion pirate ship comp again and easily finished the map with 1:52 left on the clock.

They fought well, and reached the last stretch with over two minutes left on the clock, but were unable to deal with Architect’s Bastion perched on the high ground overlooking the final checkpoint behind Choihyobin’s Sigma shield.

With time ticking down, Grant “moth” Espe dropped an Amplification Matrix in front of Architect who thanked him by absolutely mowing down the entire Titan team in a hail of bullets.

The Titans weren’t able to get back to the payload in time, and a Mei wall from Rascal sealed the deal, giving San Francisco the title and their 20th consecutive map win, and fifth sweep of the playoffs.

ChoiHyoBin’s Sigma was named the Grand Finals MVP for his oppressive Sigma play that enabled both pairs of Shock DPS on both payload and control/assault map types.