Team SMG upsets the reigning MPL MY champions in Week 2

This is their first win of the season. 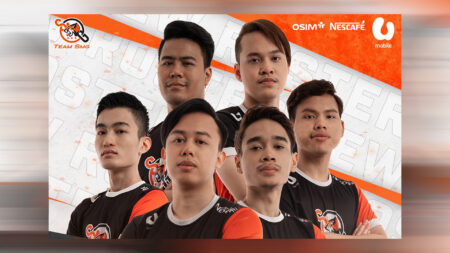 After narrow losses to Orange Esports and HomeBois, Team SMG were the underdogs going into the last match of MPL MY Week 2 against the reigning champs, Todak.

Facing Todak’s 10-man squad, Team SMG first had to contend with Xray, Ciku, and Stoo, and new additions Vinss and Ashi. They were tied in gold in game one until the fourth minute, when Team SMG blew the game wide open.

Catching out Ashi’s Rafaela and Ciku’s Brody at bot, Saiyajinn’s Jawhead found a clutch reengage onto Todak’s carry. Working with his team, he baited Todak to commit, and even managed to live with a sliver of health.

Gaining three kills from that exchange, Team SMG were in complete control. They ran away with the game, closing it out under 13 minutes with 21 kills to Todak’s six.

Switching up their roster, Todak made adjustments and brought Momo, Moon, and 4Meyz into the fray for game two. On SMG’s side of the court, they experimented by drafting Bane, a non-meta pick that was first successfully used over the weekend in MPL PH by Aura PH’s Bennyqt.

Even though the game was even in gold and kills, Todak had much more map control. While Team SMG played defensively and did not trade unnecessary kills, they ultimately could not defend their base.

In the deciding game three, Team SMG went back to a more standard team composition led by S-tier pick Mathilda, with Grock and Uranus in the frontline and Roger as their carry.

A spectacularly clean game, SMG put so much early pressure onto Todak with Mathilda’s roams and Uranus on the side lane, and did not allow them any breathing room in their own jungle. They gave four important kills to F4kez’s Roger, and another four to Smooth’s Uranus.

By 11 minutes, Team SMG almost perfect gamed Todak, leading by 13 kills, 6 towers, and one Lord to Todak’s zero. In the final clash with Lord pushing mid lane, they finally closed it out at 11:57.

This 2-1 victory over Todak was clearly a statement win for Team SMG. How far can they carry this momentum into the rest of the season?

READ MORE: ‘The main goal in esports is to win, however for Team SMG, winning isn’t everything’ says JJ Lin