Sharpen your skills on this deadly burst assassin. 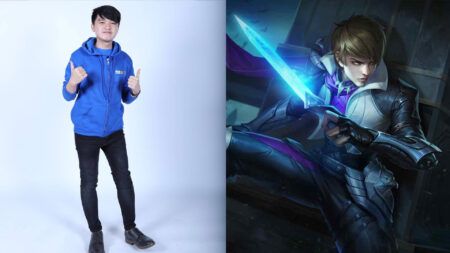 Sky Wee is a full-time streamer and professional MLBB player. He has more than one million followers on Facebook, with a large Southeast Asian audience.

Known by the title “King of Fighters”, he excels on an assortment of fighters at a high level, even when they are not in the meta. Currently he’s been expanding that pool to assassins, and has risen to the top three rankings globally on Gusion.

A magic damage hero who relies greatly on the placement of his daggers, Gusion is a high mobility, high burst assassin who can pull off a variety of combos with his skills.

Here are five tips from the man himself to up your Gusion game:

1. Use Mage Emblem, and choose the right Battle Spell for your lane

I run the Mage Emblem. In the first row, I take Agility for the movement speed, then Observation for Magic Penetration, and lastly Mystery Shop. In my opinion, Emblem wise you do not need to change this arrangement as it suits all situations.

Next, you need to choose the right Battle Spell depending on where you’re going. Retribution is the best for junglers and for mid lane, while Execute should be used in the Offlane where you can burst opponents down thanks to the extra damage.

These are the six items I usually get on Gusion: Magic Shoes, Calamity Reaper, Holy Crystal, Beast Killer, Concentrated Energy, and Winter Truncheon.

Concentrated Energy grants you Magic Lifesteal, and Winter Truncheon will give you a freeze with immunity for two seconds, naturally increasing your defense against marksmen.

My build suits all situations, but if there’s an opponent who got fed fast, I may get Beast Killer first before Holy Crystal for more resistance against burst heroes. Also in the late game, I consider selling Holy Crystal for Blood Wings.

A lesser known technique when it comes to buying items is that right after I use the freeze from Winter Truncheon, within that two seconds, I will go to the shop to sell it away and buy Immortality instead. This helps you survive even longer, and possibly change the outcome of the game.

Always max out your second skill, Shadowblade Slaughter, so that you have lower cooldowns and more damage output.

Follow up with your first skill if is running, then use Shadowblade Slaughter again for the return dagger.

After you’ve mastered the basic combo, you can use my advanced combo: 1-2-1-3-1-2-1. Again, start with your first skill, Sword Spike, where you dagger lock your opponent, then blade out with your second.

4. Roam, gank, and focus down the prime targets in fights

In the early game, focus on roaming to different lanes and look for kills. Do the same in the mid game as well. Remember to give your red buff to the marksman.

Take the turtle after a successful gank. Look for jungle invades, especially since Gusion can steal buffs quickly with his second skill and ultimate.

When it comes to the late game, focus down only on the core carries and mages heroes. During team fights, you can choose to initiate, or wait for the tank to do so depending on the situation and mastery of your skills.

5. Combo with heroes with stuns, but watch out for these threats

Guision is a freestyler who can go with any hero lineup. He does however, go best with heroes that have stuns or can set up team fights. For example, if Tigreal and Atlas are able to catch five enemies at the same time, Gusion can immediately follow up with his burst combo!

Beware of heroes who can easily escape however, like Ling, as it is harder to pin them down.

Overall, I play Gusion as a hyper carry jungler. Rarely is he played in the lane nowadays. I’m very aggressive in terms of ganking and camping in bushes. Be confident and practice!