Glitch your way through victory. 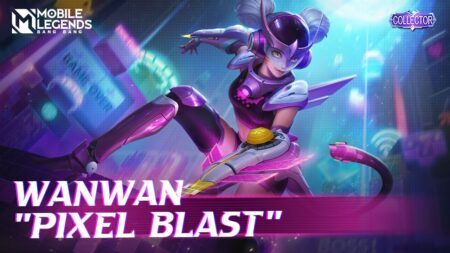 Take out your crossbows and Dance Dance Revolution pads because Mobile Legends’ latest collector release is a colorful video game-themed skin for the Agile Tiger, Wanwan.

Officially titled Pixel Blast, Wanwan ditches her traditional qipao and steel crossbows and dives into the video game world for a new look.

In the skin trailer, you can see Wanwan dancing to a DDR-esque game as she puts on her light purple battle gear, additionally equipped with a stylish visor and a glowing futuristic version of her crossbows.

Don’t worry, she still has her iconic pigtail buns, but this time around, they’re bigger and dyed blue to match with her epic skin.

Wanwan’s Pixel Blast gameplay perfectly encapsulates the arcade aesthetic. Her passive Tiger Pace now leaves a colorful ring of DDR arrows around her enemies. Once she’s hit all four weak points with her pixelized attacks, an 8-bit creature will start to float above the opponent’s head for that bonus damage.

As for her other skills, Swallow’s path now launches a Galaga-like spacecraft and leaves a fleet of smaller planes to fly into your enemies. Needles In Flowers provides you with a more flashy cleanse while Crossbow of Tang has Wanwan teleporting over your single target and nailing them with a barrage of pixels.

Wanwan Pixel Blast will replace Demonlord Valir in the Grand Collection on February 5.