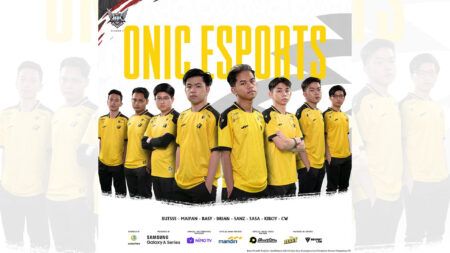 It was an intense second week of Mobile Legends: Bang Bang action in the MPL ID Season 7, but the highlight of the week was the royal derby match on Saturday between ONIC Esports and RRQ Hoshi.

After an intense match, ONIC Esports came out on top, defeating MPL ID S6 champions RRQ Hoshi with a convincing 2-0 victory. The win puts ONIC Esports in the limelight to make a deep playoff run, or even win the coveted trophy this season. This comes after they also won their previous two matches against Genflix Aerowolf and Aura Fire.

On the other hand, immense pressure is now on RRQ Hoshi, who played the match without their key players Alberttt and Psychooo. Being the first team to win back-to-back seasons, the chance of RRQ Hoshi winning three in a row is now in jeopardy.

RRQ Hoshi started game one with meta heroes such as Esmeralda, Benedetta, Claude. ONIC Esports went with recently-buffed Kaja, a once formidable pick that dwindled in popularity due to countless nerfs.

The second game was fairly similar; RRQ Hoshi opted for meta picks such as Wanwan and Lancelot while ONIC Esports went for a Lapu-Lapu support and a Kagura sidelane.

Realizing the late game potential of RRQ Hoshi’s lineup, S A N Z’s Yi-Sun Shin tried to aggressively stop the core players of RRQ Hoshi from farming up. He succeeded and him and his team were able to finish the game in just under 14 minutes.

With the win, ONIC Esports moved up to second place, replacing Bigetron Alpha. RRQ Hoshi dropped to sixth place with a record of 1-2 but were able to win the match against Bigetron Alpha the next day.

READ MORE: Why EVOS Legends’ LJ and Wannn have been absent from the competition