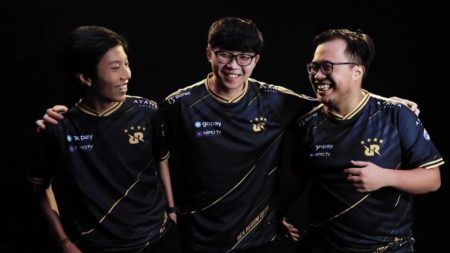 RRQ Hoshi is back on top of MPL ID, defeating defending champions EVOS Legends in a rematch of last year’s Grand Final.

The thrilling five-game series went back and forth and came down to the very last game, but in the end, it was RRQ that prevailed.

RRQ Hoshi dominated the first game with early kills, generating a 10K gold advantage by the late-game phase. With the momentum on their side, they claimed the Lord and went on to tear down EVOS’ last defenses, earning the wipeout and the game 1 victory.

With a lackluster game one performance, EVOS stepped up their aggression in the early laning phase.

Within the first few minutes, Raihan “Bajan” Ardy and three other EVOS players dived the top tower, coming out with first blood and a double-kill for Bajan.

With their great start, the rest of EVOS opted in for riskier and more rewarding plays. Muhammad “Wann” Ridwan claimed a triple-kill on RRQ, walking away with just a sliver of health. With only Rivaldi “R7” Fatah remaining alive, EVOS Legends quickly stormed the base, tying up the scoreboard at 1-1.

Game three featured the same aggressive form from the EVOS team, as they frequently crowded the top lane for quick engagements. With a strong frontline to tank tower and hero damage, Wann was able to secure a 2-for-1 exchange on kills and a tower break to bolster their pushes.

Although EVOS did their best to secure kills, RRQ eventually caught up to their lead.

With better ganks and team fights by RRQ, the team kept EVOS undermanned as they fought inside their base. After wiping them out one by one after respawn, captain Calvin “Vyn” and the rest of RRQ dealt the final blows to EVOS’ base inhibitor, securing the game three win.

With RRQ now on championship point, EVOS ditched the aggressive gameplay and focused on safe plays and completing map objectives. The change in tactics paid off, as took the lead in tower and hero kills and gold income. The defending champs eventually entered their enemies’ base with Lord with Wann picking up a maniac killing spree right before the game four victory.

With the entire season coming down to the one final game, RRQ gambled on a highly aggressive strat led by Vyn on Selena. It paid off however as Vyn, accompanied by three other RRQ members, crashed the mid-tower with Joshua “LJ” Darmansyah grabbing a well-deserved triple-kill.

With a substantial 10K gold lead, RRQ looked to ready to dominate EVOS in every clash. By the tenth minute, RRQ made their way down the mid-lane with Lord, looking for a final team fight.

With LJ rushing in and tanking most of EVOs’ damage, RRQ’s marksman Xin eliminated four players from the back-line, earning a maniac killing spree. With no one left to defend, RRQ sieged the base for the final win, becoming the season 5 champions of MPL ID.

With the championship win, RRQ Hoshi goes home with a cash prize of IDR$1B (US$63,600) and a team slot to represent Indonesia in the MLBB Southeast Asia Cup. This marks their second MPL ID championship after their Grand Finals win three years ago in season 2, making RRQ the first two-time champions in MPL ID.

READ MORE: MPL ID S5: Everything you need to know