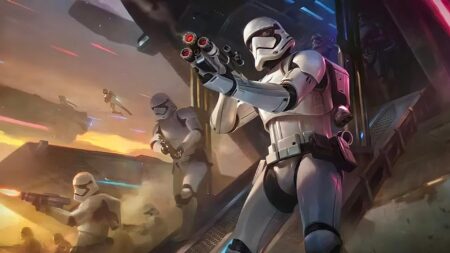 After the release of Darth Vader Argus and Master Yoda Cyclops last year, Moonton is adding another Star Wars character to the Land of Dawn — First Order Jet Trooper Kimmy.

The skin is part of the MLBB x Star Wars collaboration and will be Kimmy’s sixth skin in the game after Steam Researcher, Bio Frontier, Astrocat, Charge Leader, and Frost Wing.

In Star Wars, Jet Troopers are a stormtrooper variant that serves the First Order. Unlike ordinary troopers who are trained in ground combat, Jet Troopers are experts in aerial combat, often using their jet packs to flank enemies from above.

This skin perfectly encapsulates what the jet troopers look like in the space-opera franchise. Aside from using her jet packs to move around the map, Kimmy wields a futuristic blaster that shoots bright red lasers.

Kimmy’s second skill, Chemical Refinement, leaves a red trail in front of her, along with what appears to be three grenades that slow enemies who come into contact with it.

Her ultimate, Maximum Charge, is a sight to behold on the battlefield. Futuristic holograms surround her blaster during its charging period. A massive space missile will then fly towards her intended target and erupt upon impact.